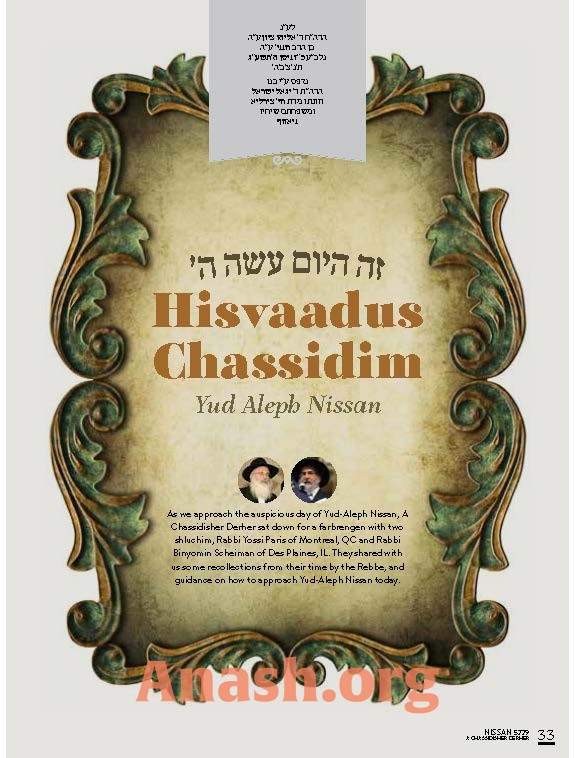 In honor of Yud-Aleph Nissan, A Chassidisher Derher sat down for an interview/farbrengen with Rabbi Yossi Paris of Montreal, QC and Rabbi Binyomin Scheiman of Des Plaines, IL. They shared with us some recollections from their time by the Rebbe, and guidance on how to approach Yud-Aleph Nissan today.

Rabbi Paris: I was a bochur in 770 in the late 5720s and early 5730s. Those were the years that Yud-Aleph Nissan really became the public Yom Tov that it is today. We were zoche that the Rebbe shared the day with us Chassidim and all of klal Yisroel, giving us the opportunity to take part in his simcha. Today it is a given that we add in our hachlatos in preparation for Yud-Aleph Nissan, we give matanos to the Rebbe, make farbrengens and do all we can to be by the Rebbe on this day. But like many things in dor hashvi’i, this was something which built up over time.

In general, if we look back at previous generations, the Rabbeim celebrated their birthdays privately. The Rebbe Rashab said a every year on his birthday. If Cheshvan fell out on Shabbos he said it publicly but if it was a weekday he said it only in the presence of the Frierdiger Rebbe.

Chassidim also didn’t celebrate their birthdays and many of older generations did not even know the exact date of their birth.

Chai Elul was a chassidishe yom tov for centuries before it was revealed by the Rebbe Rashab that it was the birthday of the Baal Shem Tov and the Alter Rebbe. Even when the Rebbe Rashab “revealed” it, he only told this to the Frierdiker Rebbe, who chose to make it public many years later.

When we look at Yud-Aleph Nissan, we find the same. Nobody really knew when the Rebbe’s birthday was. Interestingly, when the Rebbe published Hayom Yom in 5702, he placed the Frierdiker Rebbe’s instructions regarding a yom huledes in the Hayom Yom for Yud-Aleph Nissan, but no one really knew this was the Rebbe’s birthday. The first time Chassidim learned about the date was in 5707, when the Rebbe was visiting his mother, Rebbetzin Chana, in France. Rebbetzin Chana suggested to a small group of Chassidim there that they should ask the Rebbe to farbreng because it’s his birthday—and the Rebbe agreed.

However, it remained a Yom Tov among Chassidim for many years before the Rebbe began fabrenging and officially celebrating the day with us…

Read the full interview/farbrengen here, alongside an in-depth review of the Rebbe’s first published sefer on Haggadah Shel Pesach, the Rebbe’s view on the IDF Campaign for Peace in the Galilee, and much more!Join thousands of subscribers who receive the Derher in their mailbox each month, sign up here.