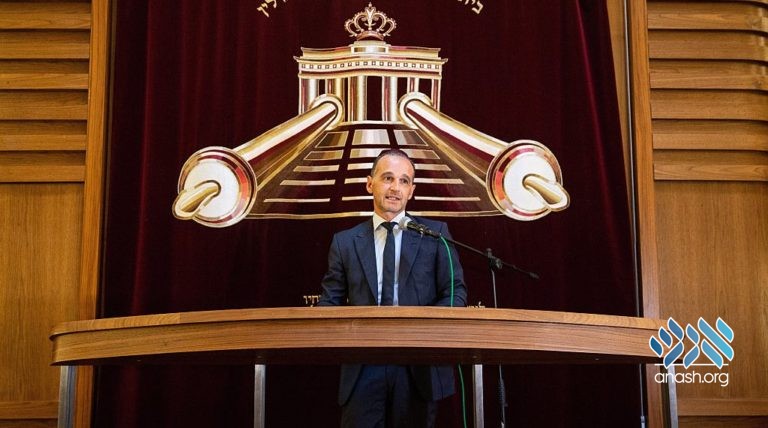 Hundreds of people, including German Foreign Minister Heiko Maas, attended a solidarity prayer at the Chabad center in Berlin to show support Rabbi Yehuda Teichtal who was attacked two weeks ago in the city.

German police have opened an investigation after Rabbi Teichtal was being spat on and cursed by two Arabic-speaking men. One of the childrens’ rabbi was involved in the incident.

“Anti-Semitism did not creep in here overnight, but it has become more vocal and aggressive. If Jewish women and men are worried about displaying their Jewishness in public—it is a disgrace to the state,” said Minister Maas at the shul.

‘’The worst thing that exists is indifference, because indifference has created the Holocaust,” he added. ‘’Anyone can set a sign against anti-Semitism, this is not just the job of politicians.’’

The minister pointed out that there are groups “who want to split our society by pretending that anti-Semitism is exclusively an imported phenomenon that separates right, left and Muslim anti-Semitism”. Maas further emphasized: “No matter what motive: anti-Semitism remains anti-Semitism. It is poison for our society.”

Regarding repeated attacks on Jews in Berlin, Rabbi Teichtal said: “We will not hide or hide our identity in any way.  On the contrary, we will do everything we can to respect each other and promote dialogue with each other.”

Germany has reported a 14% increase in anti-Semitic incidents in Berlin since last year.