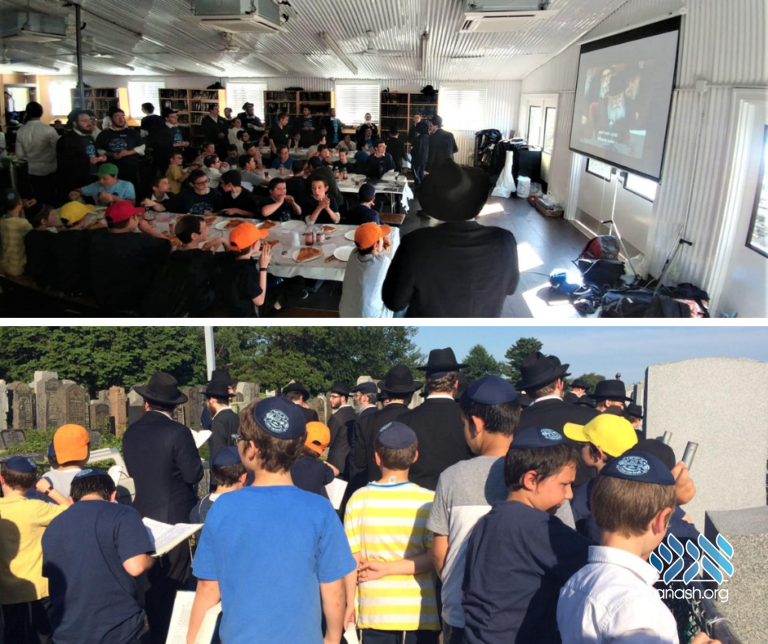 A full bus traveled from the campgrounds at Lubavitch City, Michigan to New York, after the Monday night banquet at the conclusion of camp. Before going home, the campers and staff went directly to the Rebbe’s ohel, where they were greeted by the staff who had flown in earlier that day.

The rally was a means for the boys to prepare before going in to the Rebbe. They watched a video of campers of Gan Yisroel Detroit davening mincha with the Rebbe, who then said a special sicha in their honor and gave them dollars.

The campers and staff Davened Mincha together near the Ohel, following which the 12 Pesukim were recited, led by the best campers and learners from each bunk. The group then entered the Ohel together, to report to the Rebbe on their successes at camp.

Just as in the past, they were aware of the great pleasure the Rebbe receives from seeing the fruits of his garden, Gan Yisroel, and certainly blessed all those present with continued success in bringing the lessons of camp onwards for the entire year.

Parents and siblings who came to pick up their children also joined in the rally, and joined the campers and staff in the cry of “Ad Mosai?!” awaiting the day when camp will pass by in front of the Rebbe in a revealed way and physically behold his brochos and nachas, may it be speedily.