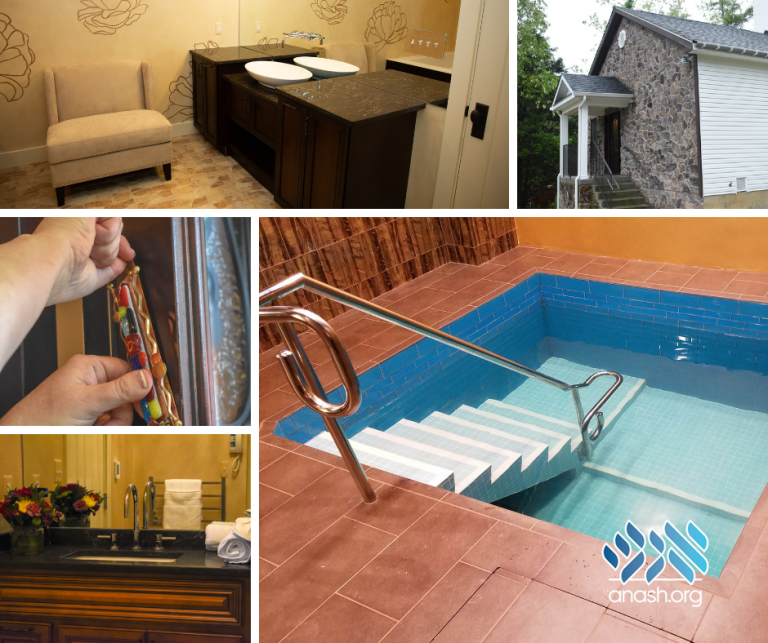 On 5 Iyar/May 10th, 80 women attended the dedication ceremony for Mikvah Be’er Rachel, the new mikvah in Gaithersburg, Maryland. For Chabad Lubavitch emissaries Rabbi Sholom and Chana Raichik, the event also marked the achievement of a personal goal they’ve had since they first moved to the community 29 years ago.

“From day one of our shlichus, one of our goals was to build a women’s mikvah for the community,” said Chana Raichik, the rebbetzin and educational director of Chabad Lubavitch of Upper Montgomery County, in an interview following the dedication ceremony.

Her father-in-law, the late Rabbi Shmuel Dovid Raichik, worked hard to get mikvahs built and women using them, Rebbetzin Raichik said. In fact, in a recently published book about the late rabbi, “The Shadar,” there is an entire chapter about Rabbi Shmuel Dovid Raichik and mikvahs. It details his efforts as the driving force behind building mikvahs in Los Angeles and educating women about the laws surrounding the mitzvah.

“In the early 1990s when Washington, D.C., was building their mikvah, knowing that my father was involved in mikvaot, I was approached to ask my father for funds for the DC mikvah,” said Rabbi Sholom Raichik. “He made his contribution and he was constantly asking me for updates regarding the building status of the DC mikvah.”

At Rabbi and Rebbetzin Raichik’s son’s bar mitzvah eight years ago, a member of their community, Marian Merewitz, stood up and proclaimed that since the bar mitzvah boy was the first grandchild named for his grandfather, the community needed to build a mikvah and start fundraising immediately. Five hundred dollars was raised that night. Subsequently, a generous donor provided funding on top of the seed money raised at that event.

Community members Barbara Friedlander, Avrah Mendelsohn, Shirin Masica, and Chanale Raichik joined the rebbetzin in planning the May 10 dedication event. Titled “Mindfulness and Mikvah,” it featured “Jewish yoga” led by Valerie Greenfeld, tehillim (psalms) read by Rebbetzin Rochel Kaplan, and a lecture with insights about the topic of mikvah from Chana Slavaticki. This was followed by dancing and refreshments, including cheese, wine, and smoothies.

“Women from many congregations came,” said Raichik. “It was a real community event.”

Raichik shared that more than one woman told her that night that after seeing how beautiful the mikvah is, using the mikvah is “not a ‘no’ anymore.” Chabad is at the forefront of changing negative perceptions of the mikvah ritual; and Raichik herself is currently learning with more than one woman who had never used a mikvah before and now want to learn about it with the ultimate goal of beginning to use it.

To bolster her point on the importance of this mitzvah, Raichik shared the story of the first woman to use the new mikvah:

“On Purim, Hashem filled our mikvah with three-quarters of the rain water needed,” she said. By Pesach, a month later, they we were still waiting for last couple of inches. In order to be considered kosher, a mikvah has several requirements; these include being filled with spring or rainwater and having a minimum of 40 seah (around 750 liters or 198 gallons) of water.

“We got a call from a woman who needed a mikvah Friday night, acharon shel Pesach who was not aware that it had not opened yet,” she continued. The woman visited the Chabad during the day that Friday, which was Yom Tov, and the rebbetzin asked if she would walk over again that night to use the mikvah even if it was pouring rain; the incoming water to the mikvah would be very cold, she added. The woman replied in the affirmative.

It was as if Hashem was waiting for someone to commit to using the mikvah, even under difficult conditions. “She took not three steps to walk back home and it started pouring rain and, Baruch Hashem, the rain overflowed the mikvah in no time,” said Raichik. “Two hours after it was filled, this woman had the zechus [merit] to use the mikvah first, and because of her we had the zechus to finally have a mikvah.”