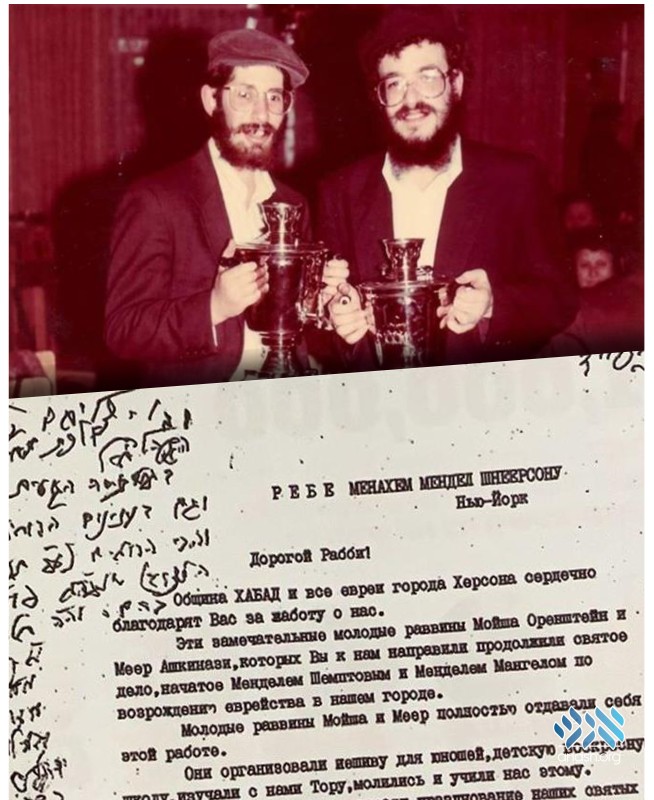 Responding to a letter penned by the Jewish community in Kherson, Ukraine, the Rebbe sensed an unasked question and found a way to address it.

By Mendy Mangel for Chabad.org

I am sharing a letter with you that was written three decades ago but was just shared with me, and brought tears to my eyes. To understand why it impacted me so profoundly, some background is necessary.

As young men, fellow rabbinical student Mendel Shemtov and I were sent to Kherson, Ukraine, for three months. We may have been the first openly Torah-observant Jews to visit from outside the USSR in 70 years! As perestroika had just taken effect, we were finally able to help rebuild the community and introduce our fellow Jews—who had been trapped behind the Iron Curtain for so long—to the very fundamentals of our tradition. I left Ukraine in January 1991 and returned the following summer.

While I was away, the newly minted Jewish community of Kherson sent this letter to the Rebbe thanking him for sending emissaries to Ukraine. The Rebbe’s answer, handwritten in the margins, reads in part: “From the content of this letter we clearly see the G‑dly soul working within the undersigned, and that this soul is a piece of G‑d from on high, literally.”

The newly minted Jewish community of Kherson sent this letter to the Rebbe thanking him for sending emissaries to Ukraine.

Inspiring, in and of itself. But there is a second part to the story.

My colleague Rabbi Orenshtein told me that shortly before the Jewish community of Kherson wrote this letter to the Rebbe, he had taught them the famous passage in the second chapter of Tanya that describes the G‑dly soul as “a piece of G‑d on high, literally.”

Apparently, the word “literally” caused quite a stir among the students.

Maria, the Jewish woman who translated these classes from Yiddish to Russian, announced that she could not believe it. “What are you talking about?” Vitaly, one of our more outspoken students, pestered Rabbi Orenshtein. “Nu, really, you’re saying I am a part G‑d?!”

And the debate continued.

Their letter never mentioned the G‑dly soul or their struggle to understand how a literal piece of G‑d can live within each of us. But somehow, the Rebbe sensed that it bothered them and found a way to address their concerns.

“If you want proof of the resilience of the G‑dly soul,” the Rebbe was telling them, “look no further than the community members of Kherson, locked behind the Iron Curtain for decades, now studying Torah and recommitting to its observance.”

Today, many of our former students have become Jewish leaders in their own right. Two are even Chabad emissaries themselves!

The Rebbe found a way to answer my students’ unasked question, and there is a message in that which I intend to take to heart: Anyone who has the courage to invest in one more mitzvah is living proof of that phenomenal line in Tanya—the G‑dly soul is a piece of G‑d on high. Literally.

Photo of the Rebbe’s ma’ana was first printed in the Beis Moshiach Magazine.