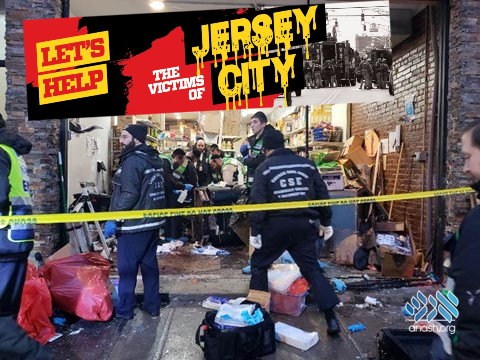 A fund has been created to cover funeral costs for the victims of yesterday’s shooting and to provide for the young orphans.

By Mordechai Lightstone for Chabad.org

The beleaguered Jewish community in the Greenville section of Jersey City has established an emergency fund to help the family of the shop owner who was killed in the JC Kosher Supermarket shooting.

“People have been asking how they can help,” said Rabbi Moshe Schapiro, who co-directs Chabad of Hoboken and Jersey City and is heading up the fund with Greenville Jewish community leaders. “We want to make sure that the three young Ferencz orphans have whatever they need in the days, weeks and months ahead.”

Schapiro also pointed out, “the family’s source of income, the small grocery store, is completely devastated. This family needs a lot of help now.”

In recent years, approximately 100 Chassidic families, priced out of Williamsburg and other Brooklyn neighborhoods, have settled in Jersey City. The JC Kosher Supermarket at 223 Martin Luther King Drive, with a small, yet visible, synagogue next door and a Chassidic school with some 40 children above, have served as a hub and the heart of the growing community.

Emergency funds are also needed to help pay for the funerals of the victims.

The campaign can be found at JerseyCityVictims.com