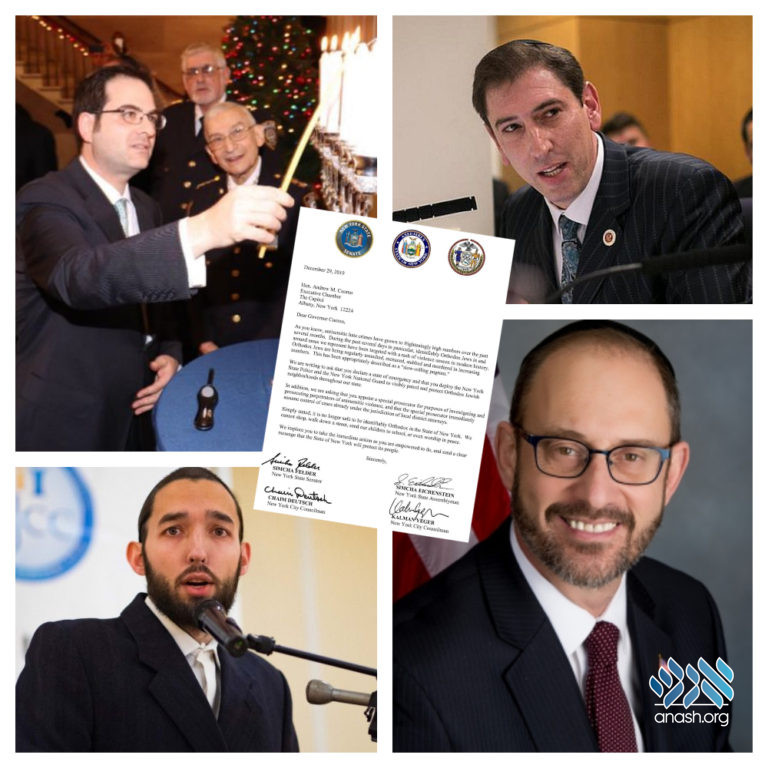 In a letter sent to Governor Andrew Cuomo, four frum NY politicians ask to have a ‘state of emergency’ declared, with the New York National Gaurd patrolling Jewish neighborhoods.

In light of the uptick of recent attacks on Jews in New York and New Jersey, four frum politicians sent a letter to Governor Andrew Cuomo to declare a ‘state of emergency’ and have the NY National Gaurd patrol Jewish neighborhoods.

The past weeks have seen over a hundred anti-Semitic attacks, with many of them in the frumme neighborhoods of Crown Heights, Boro Park, and Williamsburg.

Just last night, four were stabbed at a Chanukah party in Monsey, and many more could have been injured if not for the heroic actions of a few bystanders.

In the letter, they write “During the past several days in particular, identifiably Orthodox Jews in and around areas we represent have been targeted with a rash of violence unseen in modern history. Orthodox Jews arc being regularly assaulted, menaced, stabbed and murdered in increasing numbers. This has been appropriately described as a “slow-rolling pogrom.”

“We are writing to ask that you declare a state of emergency and that you deploy the New York State Police and the New York National Guard to visibly patrol and protect Orthodox Jewish neighborhoods throughout our state.

“In addition, we are asking that you appoint a special prosecutor for purposes of investigating and prosecuting perpetrators of antisemitic violence, and that the special prosecutor immediately assume control of cases already under the jurisdiction of local district attorneys.
Simply stated, it is no longer safe to be identifiably Orthodox in the St. of New York. We cannot shop, walk down a street, send our children to school, or even worship in peace.”