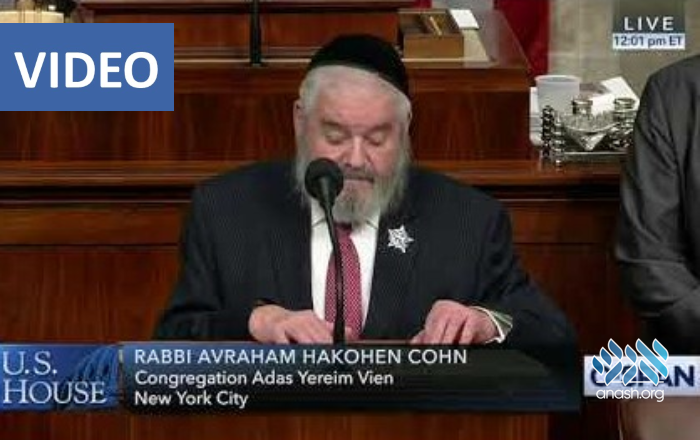 Holocaust survivor Rabbi Avraham “Romi” Cohn of Staten Island delivered the opening prayer at the US House of representatives today, thanking Hashem for rescuing him 75 years ago.

“I’m especially honored to welcome Rabbi Cohn this week as we remember the 75th Anniversary of the Liberation of Auschwitz. Rabbi Cohn’s career is merely the continuation of a life spent fighting for the Jewish faith,” said Rose in a speech on the House floor, “Rabbi Cohn saw how a democracy can be corrupted into a fascist dictatorship, and what happens when anti-Semitism is allowed to fester. Sadly, across the country we see rising hatred and anti-Semitism. Rabbi Cohn’s legacy reminds us to never accept bigotry, not when we see it in the street, and not in the halls of Congress.”

“At the age of 13, as a young boy, I was condemned to death along with my entire family by the evil of one man,” said Rabbi Cohn in his Opening Prayer. “I was saved by my Father, the Father of the Universe, who brought me to the shores of this beautiful country, the United States, the land of the free which provided me with a new safe home. Blessed be You, Master of the Universe, who has granted me life and sustenance to this day. Accept with mercy our prayers for our land, our President, Vice President and Congress. And pour out your blessings upon the United States of America.”

Rose, the first Jewish Member of Congress from Staten Island, gave a speech before the House of Representatives earlier this month on the rising levels of anti-Semitic attacks and hate crimes across New York City, as well as his continued efforts to address this crisis. Last summer, Rose traveled to Israel as part of a bipartisan Congressional delegation which visited prominent holy sites and the Yad Vashem Holocaust Memorial and Museum.