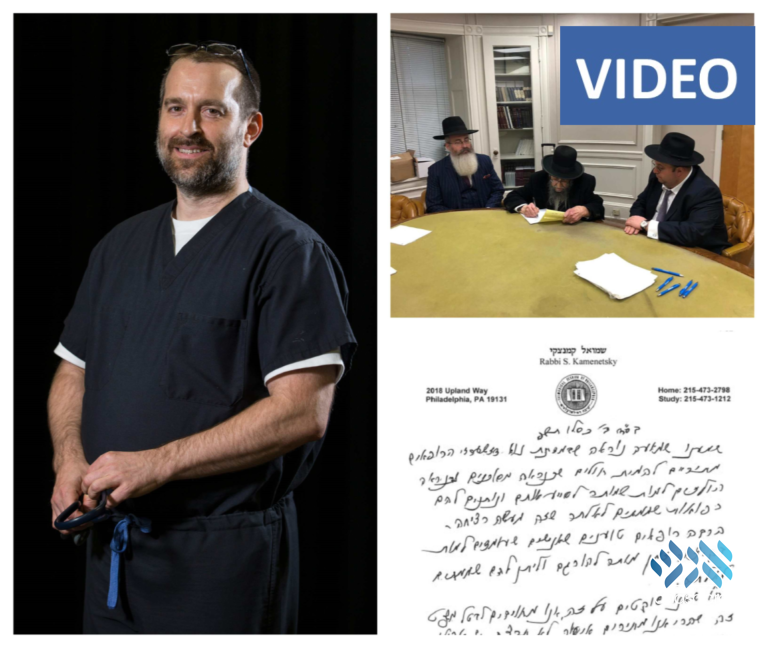 On April 12 of this year, New Jersey became the eighth state to legalize physician-assisted suicide (PAS). Known as the “Medical Aid in Dying” Act, it allows terminally ill patients to end their own lives via lethal doses of medicine. The new law further provides that should a patient or his family request the deadly poison, the doctor must either prescribe it, or at the least transfer the patient’s medical files to a doctor who would.

Contrary to claims that the bill would allow patients to choose “death with dignity,” the bill is a morally repugnant one, allowing one to take his own life – and forcing doctors to help.

The new law went into effect in August. Just a few days before the first patients would have received the lethal medicine, the Superior Court of New Jersey put a temporary ban on the bill as a result of a lawsuit filed by attorney Mr. David Smith on behalf of Dr. Yosef Glassman of Bergenfield, New Jersey.

Dr. Glassman argued the bill violates his religious beliefs by forcing him to be complicit in murder. He argued that being required to transfer medical records under the law is “not only a violation of the rights to practice medicine without breaching the fiduciary duties owing to those patients… but also violations of their First Amendment rights under the United States Constitution to freely practice their religion in which human life is sacred and must not be taken.”

The victory was short lived, however, when the Appellate Court reinstated the law a few weeks later after an appeal filed by New Jersey Attorney General Gurbir Grewal.

Rabbi Avi Schnall, head of Agudah’s New Jersey affairs, and Dr. Glassman’s lawyer, Mr. Smith, met with Harav Shmuel Kamenetsky, Rosh Yeshiva in Philadelphia, to discuss how to proceed further. The Rosh Yeshiva gave his full encouragement to keep on fighting the law, mentioning throughout their discussions that the bill sanctions “retzichah”- murder.

In a letter penned to the community, the Rosh Yeshiva is encouraging people to support Mr. Smith and Dr. Glassman in their efforts to block this new law through every means possible.

The following is the Rav’s letter:

We received a horrible report that in the State of New Jersey doctors are allowed to kill patients who are terminally ill. They are allowed to help them kill themselves and give them drugs; this is murder. Many doctors claim that it’s legal to kill people who are about to die soon.

We should not stay silent.  We have to stop this, otherwise we give a permission to kill, to murder, which is against the “You Shall Not Kill” commandment. It is also a concern that it will be legal to murder patients with non-curable illness.

We must stand against this law. We need to assist by donating money and doing anything in our power to terminate this law.

It is a big Mitzvah to assist those who fight the law.

To this end, Dr. Glassman has joined forces with concerned citizens, clergy members, and medical professionals from across New Jersey and from all religious denominations to fight the encroachment of euthanasia in our own community. Together they have formed the Lifeline Legal Fund, aimed at fighting physician assisted suicide in New Jersey and protecting life.

It’s not just religious beliefs that are motivating people to fight the new law. Dr. Wesley Ely, a professor of medicine at Vanderbilt University’s School of Medicine, says he worries about laws like New Jersey’s because “a law like this can easily end up taking advantage of people who can’t speak for themselves or who are too poor and educated to do so.”

“We in the medical profession have done such a poor job with palliative care … which has left people afraid, and their fear is legitimate. I mean, they’re afraid that they’re going to die in pain and die suffering,” Ely says. “The answer to that is not to kill them. The answer is to do a better job of palliative care and provide a remedy for suffering.”

Religious imperatives aside, there are strong logical arguments against PAS, such as the ‘slippery slope argument’: if there is no moral or philosophical basis for PAS, then there is no telling how far changes to PAS laws will go in the future, and no stopping the changes.

Take, for instance, the situation in the Netherlands, where in the 1980s the Dutch government stopped prosecuting physicians who committed voluntary euthanasia on their patients. By the 1990s over 50 percent of acts of euthanasia were no longer voluntary. In 2001 euthanasia was made legal. And in 2004 it was decided that children also could be euthanized.

It took the Dutch almost 30 years for their medical practices to fall to the point that Dutch doctors are able to engage in the kind of euthanasia activities that got some German doctors hanged after Nuremberg.