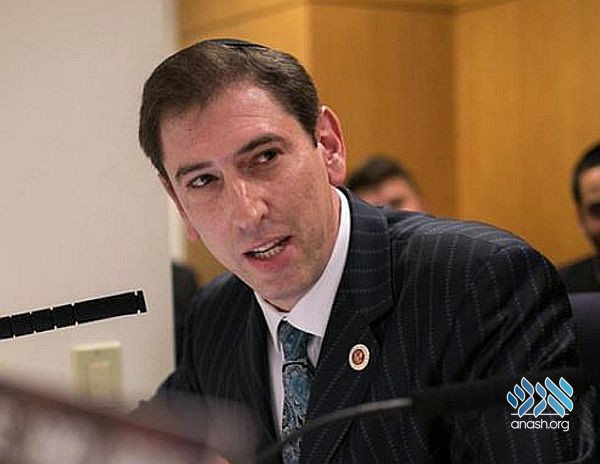 NYC Councilman Chaim Deutsch has filed paperwork to run for Congress in in New York’s 9th District. He hopes to unseat Democrat Yvette Clark, who has held the seat in 2007.

Councilman Chaim Deutsch is a life-long Brooklynite, representing the diverse communities within the 48th City Council District – an office he first assumed in 2014. He is a Democrat. The district includes Brighton Beach, Gerritsen Beach, Gravesend, Manhattan Beach, Marine Park, Midwood, Plum Beach, and Sheepshead Bay in Brooklyn. His term ends in 2021.

In a statement to YWN, Deutsch said the following:

“I am excited to announce my candidacy for United States Congress in NY-9. Public service is in my blood – it is how I was raised and it is how I have lived my life. For the past six years, it has been my honor to represent the 48th district in the City Council, one of the most diverse districts in NYC, advocating for my constituents every single day. It is with this same spirit & passion that I pursue this new opportunity in Congress. I am proud to live and raise my family in NY-9, and I believe every one of my neighbors deserve a tireless advocate on their behalf.”

In the 2018 election Clark narrowly won a primary challenge Adam Bunkeddeko, winning by less than 2,000 votes. Bunkeddeko, a progressive activist, is running in this election as well.

Political insiders told YWN that Deutsch needs several things to go in his favor to win.

1- Full turnout from frum (Orthodox Jewish) voters in the district. That’s Democrats. About 20,000- 30,000 between Flatbush and Crown Heights.
2- Works hard to bring out his Russian, Chinese, & Muslim friends in the district. Most analysts believe he can.
3- Taps into growing fatigue & frustration with the incumbent Clarke in the large Caribbean and African American communities. Deutch has made deep & lasting alliances with these communities and political leaders and is seen as a unifying figure.
4- Multiple candidates running against Yvette helps him substantially. At least 3 others are running, which hurts Yvette.
5- Turnout overall to be down on Election Day (Rainy, disinterest etc..)

New York’s 9th Congressional District is located entirely within Brooklyn. It includes the neighborhoods of Brownsville, Crown Heights, East Flatbush, Flatbush, Kensington, Park Slope, Prospect Heights, Midwood, Sheepshead Bay, Marine Park, Gerritsen Beach and Prospect Lefferts Gardens. Prospect Park, Grand Army Plaza and the Grand Army Plaza Greenmarket, the worldwide headquarters of the Chabad-Lubavitch Hasidic community and the Brooklyn Children’s Museum are located within this district, as well as, in the Prospect Heights neighborhood, the Brooklyn Museum of Art, the Brooklyn Botanic Garden, the Central Library, or main branch, of the Brooklyn Public Library, and the Kurdish Library and Museum.

Prior to 2013, the district consisted primarily of middle-class white neighborhoods, including large Jewish, Italian, Irish, and Russian populations, in southern Brooklyn and south central Queens. Before redistricting, the Queens Tribune found that the district increasingly swung Republican following the September 11 attacks in 2001, when many police and firefighters were lost from the Rockaways.

Its rightward shift was also attributed to the increasing tendency of Orthodox Jews to vote for Republicans. Its representation in Congress was reliably Democratic for decades, electing prominent liberals such as Chuck Schumer and Anthony Weiner and, prior to that, Emanuel Celler and Elizabeth Holtzman (when the district was differently numbered). Anthony D. Weiner was Congressman from 1999 until he resigned on June 21, 2011. Republican Bob Turner succeeded Weiner after winning the special election on September 13, 2011. However, the previous 9th District was eliminated after New York lost two districts in 2010 redistricting, and its territory was divided among several neighboring districts.