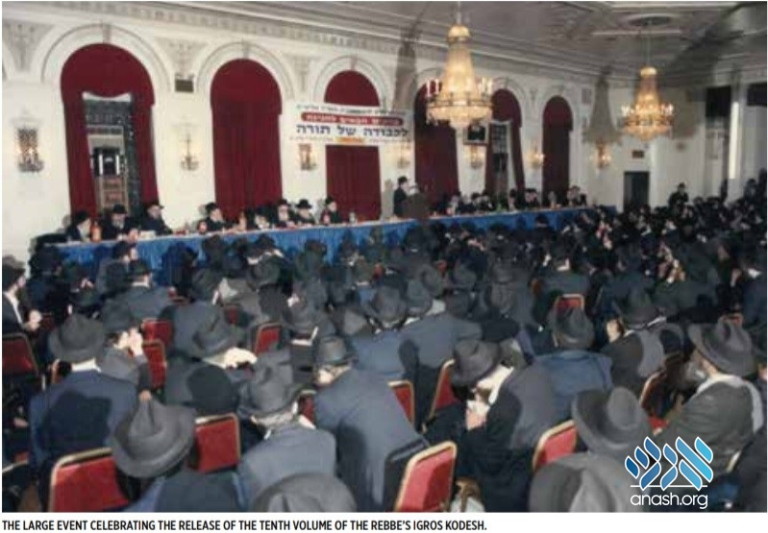 Listen: In Adar I, 5749, a gathering was held in Crown Heights that celebrated the tenth volume of Igros Kodesh and addressed several hot topics of the time.

In Eretz Yisroel, a great schism divided the frumme yidden: years of internal disagreements between factions within the political party Agudas Yisrael came to a head, causing a split. A majority of chassidim remained with the Agudah, while the Litvishe community broke away to form a new party, Degel HaTorah. As a one-time “horo’as sho’oh,” the Rebbe publicly supported the Agudah during that years’ Israeli elections, resulting in unprecedented success.

Unfortunately, the leadup to the elections and the period that followed were times of great strife during which old animosities between chassidim and misnagdim came to the forefront. Lubavitcher children in Bnei Brak had a particularly difficult time, facing scornful hostility from peers whom they had, until then, considered friends. Though thousands of miles away, the Crown Heights community was closely following the events in Eretz Yisroel.

Several months after the hotly contested Israeli elections, excitement of another sort was brewing in the schunah. Just a few years earlier, a project aimed at publishing a treasure trove of the Rebbe’s letters had been started. The efforts had already yielded nine volumes of the Rebbe’s Igros Kodesh, and now the tenth was about to be released.

A gathering in honor of this publication was held on Chof-Alef Adar Alef at Oholei Torah, with many great rabbonim in attendance. While not Lubavitcher Chassidim themselves, many of these rabbonim were mainstays at Lubavitcher functions, such as siyumei haRambam and the Kinus Torah in 770. For the first time, a recently discovered recording of the event, chaired by the late Rabbi Yosef Halevi Wineberg, is being made available. At this time, only the second half of the audio has been found.

Rabbi Yisroel Piekarski, Rosh Yeshiva of the Central Yeshiva in 770 at the time, delivered a fiery speech, expressing great pain at what some were publicly saying about Lubavitch during this difficult period. He told of a colleague on whom he had to hang up mid-conversation because of his outlandish statements regarding Lubavitcher activities. Rabbi Piekarski, who was not a Lubavitcher chossid, spoke of his discussions with the Rebbe in learning, emphasizing that there is no part in Torah with which the Rebbe is not completely at home.

Other speakers included Rabbi Yitzchok I. Liebes, Graidinger Rov and Raavad of the Igud Horabbonim, Rabbi Chaim Zev (Herbert) Bomzer, rov of Young Israel of Ocean Parkway, Rabbi Dovid Hollander, rov of the Seabreeze Jewish Center and President of the Rabbinical Council of America, Rabbi Emanuel Simanov and Rabbi Zevulun Lieberman of the Flatbush Vaad HaRabbonim. All spoke in great praise of the Rebbe and Lubavitch’s activities, and of inyonei hasho’oh – the prevalent issues of that time.

Rabbi Sholom Ber Levin, Aguch librarian and editor of Igros Kodesh, then spoke about the new volume and its contents, in honor of which the gathering was organized.

The audio clip presented here was recently discovered in the archives of Aron Mendelsohn, a”h.