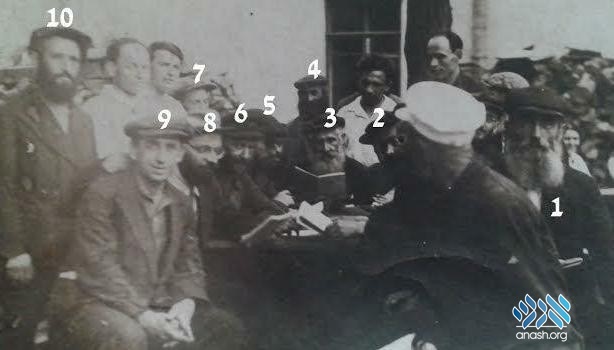 This photo is one-of-a-kind and is a snapshot of the dark days in the Soviet Union.

The photo was taken in the days and months leading up to the terrifying times that followed in the next two years when scores of chassidim were arrested and never heard of again. The location was a Jewish-run factory in Pushkin, outside Leningrad, (Petersburg) Russia, in the year 5696/1936. It was apparently snapped during break time when workers were given time to learn Torah and daven.

As religious institutions were closed by the government, many great rabbonim and mashpiyim were forced into manual labor to provide for their families. Those that didn’t were considered “parasites” and not part of helpful society. They were thus grateful if they could work in such factories and turn out their quotas without being mechalel shabbos.

In the photo we see as numbered: