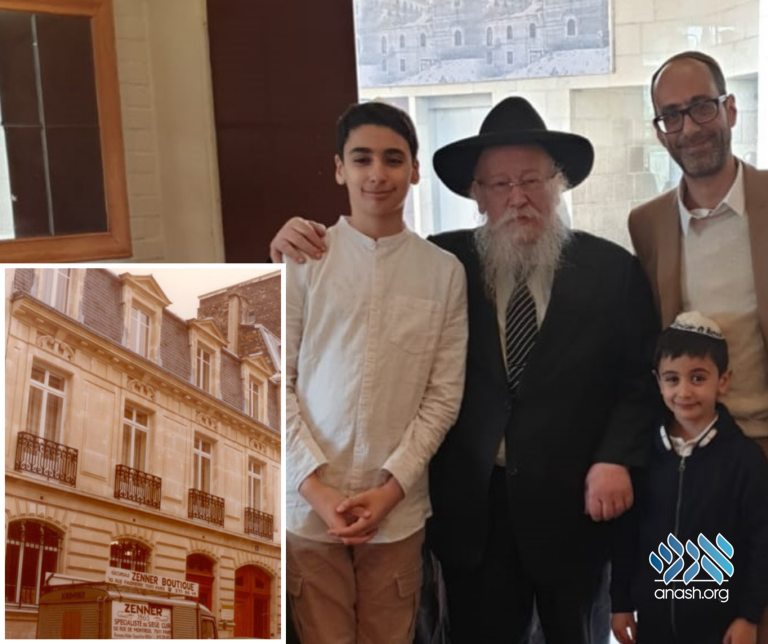 The Cohen family is saying goodbye to their lives in France, but also to a special home, the home of the mother of the Lubavitcher Rebbe in Paris, who passed on 25 years ago this month.

The couple Yael and Boaz Cohen, a project director and optician respectively, experienced a major crisis when their Parisian home went up in flames in 2004. They were a young couple with a baby who found themselves without a place to live and with all their memories on fire. Many community members, including Yael’s workplace at the time, enlisted to help and in a joint effort, a modest apartment was found in a high-rise building about a year after the fire.

“We lived in the apartment and had no idea what its historical value was,” said Boaz, who came to Israel to find an apartment and work before the rest of the family arrived. “One day, a completely random day, there was a knock on the door and beyond the peephole we saw a man who looked like a Chabad Chassid; we opened the door and he looked very excited.”

On the other side of the door stood Rabbi Shmuel Butman director of Lubavitch Youth Organization, who was busy researching the life of the Lubavitcher Rebbe. He tried for a while to locate the exact location of the Rebbe’s mother’s house in Paris. On the way, he managed to enter the building and look at doors until he found one with a mezuzah. Without hesitation, he knocked on the door and was amazed to discover that the occupants of the apartment at that time were Jews themselves. “This is a house of great significance for the Chabad Chasidim, since the Rebbe would come to the place twice a day and give classes there from time to time.”

The Rebbe and Rebbetzin, arrived in Paris in 1933. As the Nazi occupation of France progressed, the two fled to the United States, where he was appointed head of the Chabad educational institutions. Rebbetzin Chana lived during these years in Ukraine and afterwards, she escaped the communist regime to Paris in 1947. The Rebbe then returned to Paris to stay with his mother until she could join him in the United States.

The Cohen couple stayed in the home of Rebbetzin Schneerson until their arrival to Israel this week, a move they are making to improve their children’s future: “We came to the house by accident, but since we discovered that we lived in the home of Rebbetzin Chana Schneerson, many came to visit us,” said Boaz Cohen. “Today we leave our house in France and going up to our new home in Israel. Despite the separation from this special home, we’re determined to immigrate to Israel, to Yerushalayim, and join our extended family.”