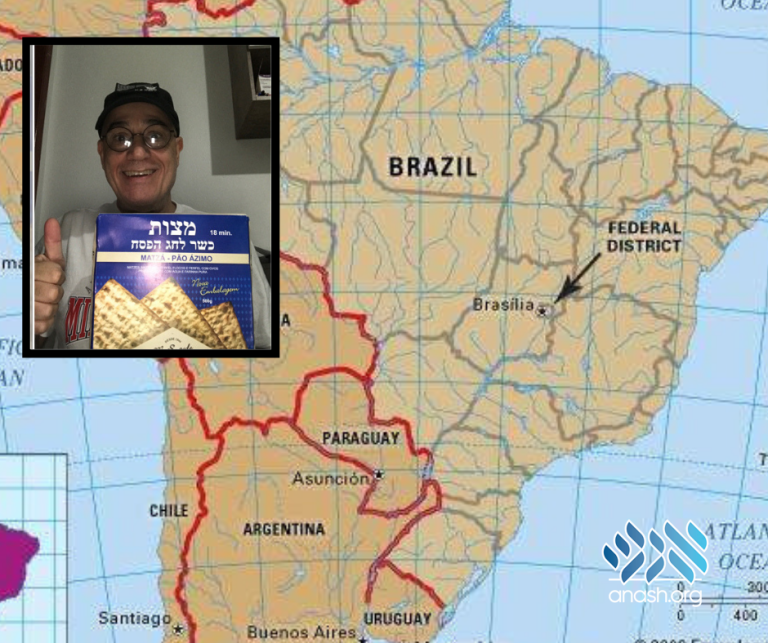 A Yid living in Ceilândia Sul Brasília is not too far out of reach, to receive a package of Shmura Matza.

A couple of weeks before Pesach I reached out to Rabbi Dovid A. Polter at Lubavitch Youth Organization, as usual, to offer JNet members the opportunity to send shmura matzah to their study partners or anyone they know who might need it with a personal message.

“Is it possible to be put on a list to receive? I am Jewish and would love to be able to get kosher for Passover matzah, however, I live in Ceilândia Sul Brasília. And don’t have very many resources as I did when living in the USA.”

Ed Hughes was a former JNet member, a disabled army veteran who had moved to Brazil to try and help his wife and her children get the necessary documentation to immigrate to the US.

Originally from Minnesota where he had been no stranger to Judaism and Jewish study, he had studied Tanya through JNet for more than a year and a half with Moshe Parelman from Brooklyn.

JNet administrator Basie Kessler responded saying that unfortunately, the service that LYO was providing could only send the Matzah in the United States.

She then forwarded me the email asking if there was anything we could do.

Not knowing where Ceilandia Sul was I reached out via to fellow Cedarhurst community member Isaac Begun who I knew was from Sao Paulo, Brazil.

“Why don’t you start here?” he replied, sending me the link to Chabad of Puerto Allegre.

I remembered that my sister had actually gone to seminary there and reached out to her in Israel.

“Hadassah, I have a question for you about Brazil, weren’t you in seminary there” I asked.

“;-) You need to ask Shifra” she replied, “I was in Australia for seminary”.

In a family with 5 younger sisters I can sometimes forget these things.

Shifra was happy to tell me that the person to speak to in Puerto Allegre was Rabbi Liberow.

After a couple of tries I reached him, but he had no idea where Ceilandia Sul was.

“You probably need to speak to the Rabbi from Brasilia, Rabbi Leib. I can’t remember his family name but if you call Rabbi Nissim Katri in Belo Horizonte he should know where it is”

“Yes Ceilandia Sul is outside of Brasilia. You need to contact Rabbi Leib Rojtenberg. He will be able to help.” Rabbi Katri said.

At the chabad house I was not able to reach anyone who spoke English. Breaking my teeth in Spanish I was able to determine that the Rabbi would be back in the Chabad House in several hours. Missing the time he was there, I emailed him introducing myself and asking if there was some way we could get some Matzah to Ed and asked if he could send me his number so I could explain.

The Rabbi replied: “He’s living in a city on the outskirts of Brasilia, but I’ll definitely help deliver a box of matzah to him.”

After conversing with him the following day he explained that the area Ed lived in was a place that even his housekeeper a local who lived not far from there was apprehensive to go to.

“I won’t be able to deliver it personally but I would be happy to mail it to him.”

Minutes later this image showed up on my phone:

“Thank you so much and a kosher and happy Pesach” I replied.

A couple days later this was Ed’s facebook status:

Speaking to Ed I suggested he try and attend the Seder at Chabad.

“I’m hypoglycemic and have difficulty walking. Compounded by not speaking the language and not having a car, getting to Chabad of Brasilia – an hour plus drive – will be quite challenging. I will try and see if I can do it.

You guys at chabad are amazing you really pulled through for a Jew in the middle of nowhere. Thank you so much!”

JNet provides one-on-one learning on the phone or online for half an hour a week to people all over the world.

Know someone would be interested in learning, volunteering or supporting torah learning? Have them go to www.jnet.org or call or text us at 347-770-JNet (5638)