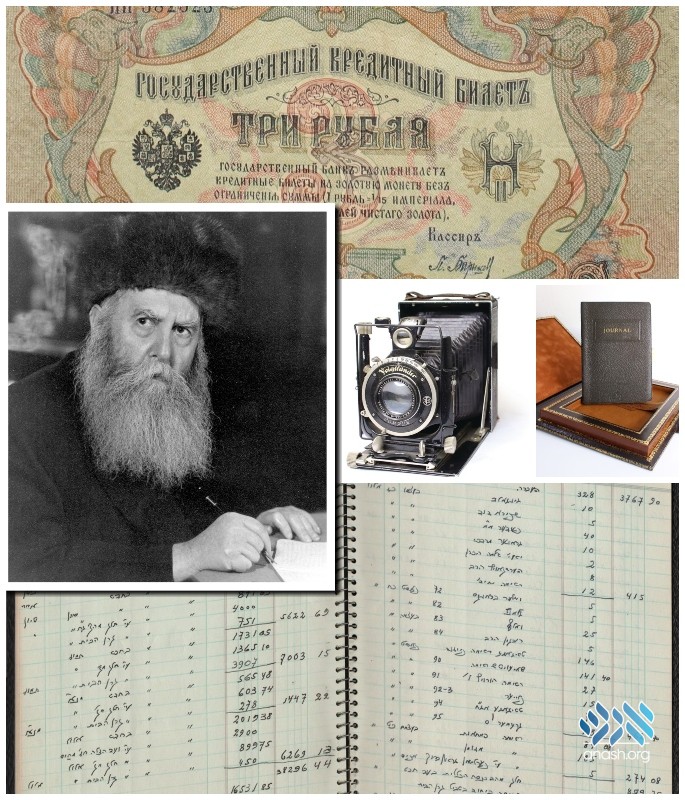 A diary of the Frierdiker Rebbe is being auctioned off for a starting price of $40,000. A camera and ruble note he gifted to his grandson are being sold as well.

Numerous historical artifacts connected to the Frierdiker Rebbe are going to auction in three weeks, including a personal diary in his handwriting. Starting price? $40,000

The notebook contains the detailed records of the daily financial activities of the Frierdiker Rebbe during his first year in the United States, and it provides a glimpse into how Chabad functioned during those crucial months. The records, handwritten by the Rebbe, include donations and expenses.

Payments for staying at the Greystone Hotel, the trip to Lakewood, purchasing 770 Eastern Parkway and paying lawyers’ fees for efforts on behalf of European Jewry are all noted.

Of particular interest are the entries entitled ezer, assistance to organizations unaffiliated with Chabad, such as Rabbi Breuer’s mikvah in Washington Heights, the students of the Mir yeshivah, Ezras Vilna and the Yitzchak Elchanan yeshivah.

This is not the first time the notebook has been sold. In 2016, the notebook was auctioned off by the Kestenbaum Auction House, with a starting price of less than half of the current one.

Three other items are also being auctioned off, albeit for significantly less. In 1941, the Frierdiker Rebbe gave his grandson a gift of a camera. When he wanted to take a photograph of his holy grandfather with his new camera, the Rebbe acquiesced and set aside precious time, and even put on his Shabbos suit for the occasion.

The photograph taken is included as well. This photograph has become one of the most famous photographs of the Frierdiker Rebbe.

Also included is a Russian ruble which the Frierdiker Rebbe gave his grandson as well. Upon giving him this Ruble, he told his grandson: “This is so that you should remember where you come from!” – meaning, that he should remember his family’s majestic past in Soviet Russia, where they fought a holy religious battle against the communists.

The camera, picture and ruble note, were given by the grandson as a gift to a certain individual who is currently selling them. The starting price for all three items together is $1,900.