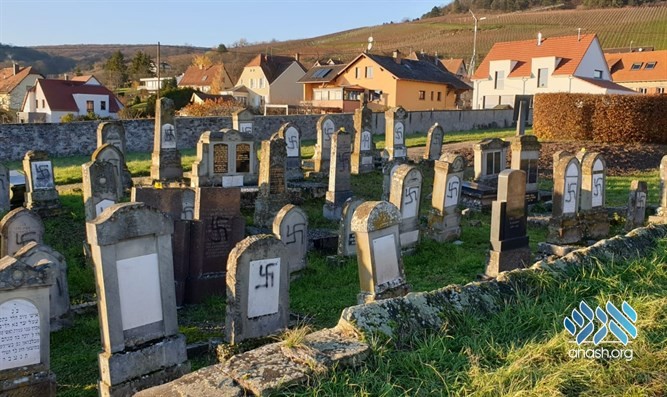 France is to open a national bureau to lead the fight against hate crimes after 107 graves were desecrated at a Jewish cemetery in the northeast of the country, the interior minister said on
Wednesday.

The daubing of swastikas and other anti-Semitic graffiti on the graves at the cemetery in Westhoffen around 25 kilometers (15 miles) west of Strasbourg in the Alsace region was the latest racist attack to shock the country.

“The Republic itself has been desecrated,” Interior Minister Christophe Castaner said after visiting the cemetery, which dates from the 16th century.

The Alsace region has suffered a rash of racist vandalism over the past year, most notably the desecration of 96 tombs at a cemetery in Quatzenheim in February, which sparked nationwide outrage.

The rising number of anti-Jewish offences reported to police — up 74 percent in 2018 from the previous year — has caused alarm in the country that is home to both the biggest Jewish and the biggest Muslim communities in Europe.

“Jews are and make France,” President Emmanuel Macron wrote on Twitter Tuesday. “Those who attack them, even their graves, are not worthy of the idea we have of France.”

“Anti-Semitism is a crime and we will fight it in Westhoffen as everywhere until our dead can sleep in peace,” he added.