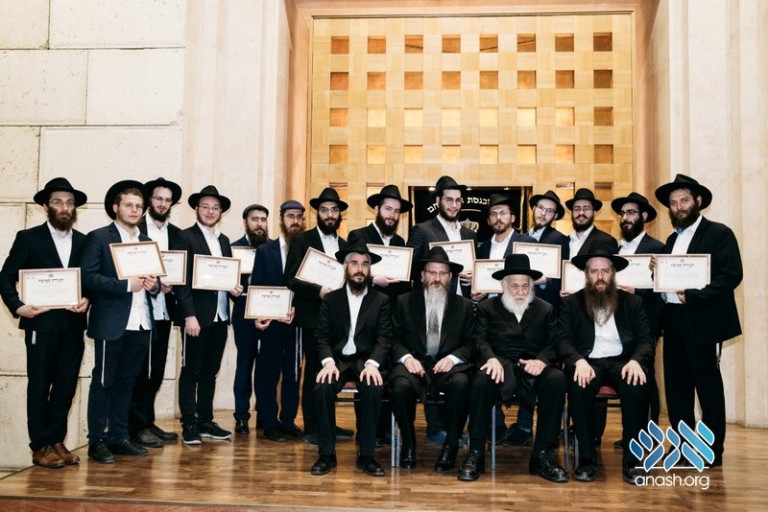 Years of hard work followed by exams with Russia’s Chief Rabbi and Rabbi Yeruslavsky, dozens of alumnae from Russia’s oldest Yeshiva – Tomchei Tmimim –  were ordained to serve as Rabbis throughout the country. The sound of Torah learning and teaching grows stronger in Russia.

This may not be the first group of Yeshiva students to receive Rabbinical ordination in Moscow, but the excitement of it is no less than the first time. Most of these students did not receive a Jewish education as children, yet they worked hard and persevered at Torah learning until they reached this milestone.

Now, they are meriting to see the fruits of their labor as they receive their certification as Rabbis. These fresh young Rabbis are joining the ranks of the dozens of alumnae that have graduated Moscow’s Yeshivas Tomchei Tmimim over the past thirty years. Today they serve as the Rebbe’s Shluchim and Rabbis all over the FSU, and beyond.

The exams were spread out throughout the course of a year, with the final exam taking place this week with the Chief Rabbi of Russia, Rabbi Berel Lazar, as well as the Rabbi of Nachalas Har Chabad, Rabbi Yitzchak Yehuda Yeroslowsky. They were joined by the Rosh Yeshiva Rabbi Menachem Mendel Goldberg, and the director of the Smicha program, Rabbi Dovid Rozentzweig.

After hours of rigorous testing, – which the students passed with flying colors – the examining Rabbis signed the certificates. They then all sat down together with the newly ordained Rabbis, to a Chassidic farbrengen in the hall of Marina Roscha’s main shul, in the center of Moscow.

The Yeshiva’s administration thanked all of the Shluchim and Rabbis throughout Russia, who encouraged and sent these young men to learn in Yeshiva. Whether they started out at an Ohr Avner school, at a YaHaD youth program, or any other event run by the shluchim, it is thanks to the dedication and the seeds that the Shluchim sowed, that there are now wonderful fruits to reap. Thank you to the Chief Rabbi of Russia, Rabbi Berel Lazar,  who has established a wide variety of educational platforms and institutions in the city of Moscow, to which any Jew of any age and background can come to learn and further pursue their Jewish education.