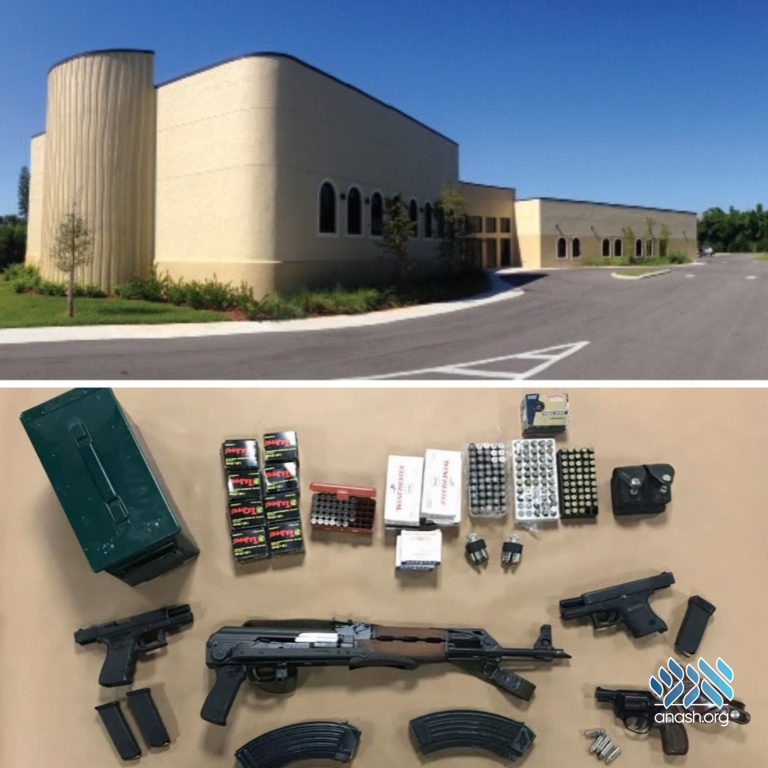 A man was arrested on Wednesday for threatening to shoot up the Chabad Center in Fort Myers. He had the weapons and ammunition to carry out the threat.

A man arrested on Wednesday who spoke about shooting up a synagogue in Fort Myers had the weapons and ammunition to carry out the threat, authorities said.

The suspect, Alfredo Sanchez, 43, faces charges of Possession of a Firearm and Ammunition by a Felon. It is now being determined if federal charges are appropriate.

Rabbi Yitzchok Minkowicz confirms Sanchez and his family have attended the Chabad Lubavitch of Southwest Florida for about a year.

“He comes to the synagogue, prays, he studies, he volunteers, he helps out,” Rabbi Minkowicz said, “so yes absolutely it was a surprise; we had no inkling of any of this stuff.”

The rabbi adds that investigators first started looking into Sanchez after hearing about an “unverified” threat against the south Fort Myers synagogue. The convicted felon had previously been arrested and sentenced to prison for firearms charges.

“Talking about threats against a synagogue, I will say yes we take that very, very, very, serious,” Rabbi Minkowicz said. “We work very closely constantly with the local authorities, state authorities, federal authorities. We have a big security budget here that’s funded by local people.”

“Sanchez made at least one statement indicating that he had the ability and the means to carry out a shooting at the synagogue,” LCSO Sheriff Carmine Marceno said in the press conference. “It was also reported that Sanchez offered to sell a firearm to a synagogue member.”

After LCSO interviewed multiple witnesses, probable cause was found for a search warrant of Sanchez’s home where a large amount of ammunition, gun cases, and other accessories were found, but no firearms.

The investigation continued and it was revealed that Sanchez had previously visited a nearby relative’s home where he dropped off a duffle bag of weapons including multiple firearms, including an AK-47 style rifle.

The contents of the investigation came as a surprise to his neighbors, who call him a regular guy.

“He’s been a hell of a gentleman,” Earnest Larussi said. “Wife, two kids, cuts the grass, everything.”

“Always talk to me, wave to him,” David Noack said. “He seem like a really good guy.”

But according to Sanchez’s arrest report, two weeks ago he told a fellow synagogue member, “if he had another screw loose, he could go to the synagogue and shoot it up.”

For the rabbi, it was disturbing that the convicted felon would harm congregants. Not only did Sanchez go to the Chabad frequently, but the felon has also recently been living in a house owned by the synagogue with his wife and children.

“My message to him and his family is that we love them and we want them to have a great peaceful and happy life,” Rabbi Minkowicz said.