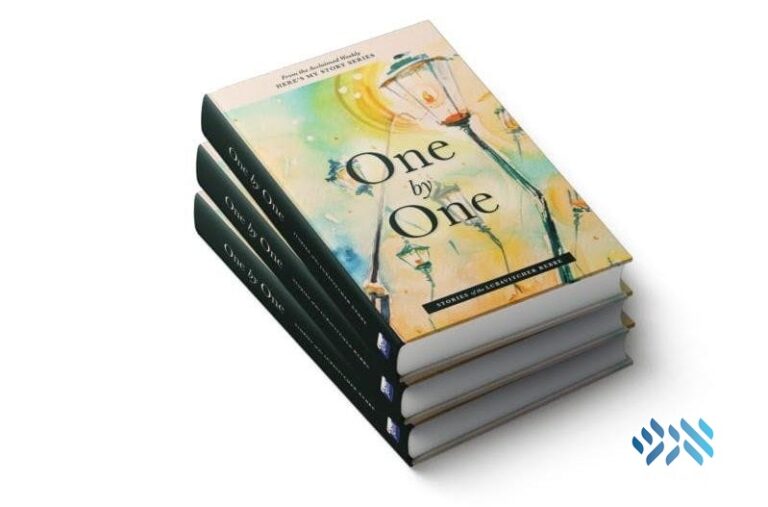 Uriela Obst Sagiv, a former journalist and Pulitzer nominee, shares how she became the author of JEM’s weekly Here’s My Story and the new book One by One.

My story begins many years ago in the Old City of Jerusalem where I live—a stone’s throw away from the Kotel—with my husband, a Sephardic rabbi. As is common here, we are often asked to host strangers for Shabbat meals, and so it was on this particular Friday evening.

The couple—I barely recall them now—for a reason unknown to me—trashed Chabad at the dinner table. I tried to divert the conversation from this kind of lashon hara, but was not successful. Finally, I said, “How can you say such bad things about these people who are so kind?”

This is all I knew of Chabad Chassidim: that they practiced uncommon lovingkindness— Judaism with a smile at the airport, a nonjudgmental acceptance of every Jew into their homes, handouts of candles, prayer books and even tefillin if need be.

I have come to believe that something shifted in my universe as a result of the words I spoke that night because, suddenly, Chabad was at my door.

Possibly, the most moving Chabad project came my way through a Holocaust survivor who knew the Previous Rebbe as well as the Rebbe. I wept while I edited that book and, when it was published, Rabbi Elkanah Shmotkin—the director of Jewish Educational Media (JEM), the organization that is dedicated to the accurate preservation of the Rebbe’s legacy—came calling. He said he appreciated how I preserved the voice of Leibel Zisman, the Holocaust survivor, in the telling of his story, I Believe, and he had a proposition: Would I be able to take raw transcripts of interviews with people describing their encounters with the Rebbe and craft from them short, first-person stories for a weekly newsletter?

I was willing to try, and the rest is history—350-plus stories have appeared and have profoundly influenced their readers. But maybe no more than they have influenced me. And that has been a tremendous blessing.

Every week I am sent a transcript of a videotaped interview, which JEM has conducted in some far-flung part of the world. From selections of that often very lengthy transcript, I begin to quilt a story—“quilt” is the best word I can think of because I cut bits and pieces and stitch them into a whole article, which cannot exceed 1,250 words and which describes the most memorable experience that individual had with the Rebbe.

After this, the JEM staff—of late Rabbi Yecheskel Posner has been the lead editor—fine-tunes what I have written, taking pains to do extensive and meticulous research so that everything in the final article is highly accurate. If it is not, we do not go forward. The final version goes to the interviewee for his or her approval, and then, depending on the feedback, we are set to go to print. It is a complicated and painstaking process, involving many people and many hours, but all that effort hopefully shows in the final result. The proof, I think, is in the overwhelming positive response these stories have received when published.

No two stories are alike, and it amazes me how varied the Rebbe’s advice has been, tailored to each person whose soul the Rebbe clearly understood and guided. There was the woman whom the Rebbe encouraged to obtain a Ph.D., and then another whom he dissuaded from attending college. There was the young man whom the Rebbe discouraged from pursuing rabbinic ordination, and the one whom he guided in that very direction. The bachur whom he taught how to pray with kavanah, telling him to bend the pages of his prayer book to mark as far as he got praying wholeheartedly, so he could pick up there the next time. The scientist who was told to place a pushke in the laboratory where his experiment kept failing and to put a coin in it every time he left the room. The little boy who pronounced the wrong blessing but the Rebbe immediately came up with a halachic excuse so the kid would not be embarrassed. The little girl whom he entertained by drawing her a picture of a house out of Hebrew letters.

In the stories, I see certain patterns. For example, the Rebbe routinely sought to empower women. It seems to me that no shlichut was approved without the wife signing on. Reports were requested from both husbands and wives. Girls had to be featured alongside boys on the cover of a children’s magazine. But more than anything, his regard for women can be seen in his relationship with Rebbetzin Chaya Mushka, about which he said that having tea with his wife was as important a daily obligation for him as putting on tefillin.

Another example: So many people remark on how well versed the Rebbe was in whatever language he conversed, how he spoke that language without a trace of an accent, yet we hear in recordings that, in English at least, he had a heavy accent. How could all those people have missed that? I think there is a simple explanation: When the Rebbe spoke to them, he spoke directly to their souls and his words were crystal clear.

Also, there is the Rebbe’s commentary on his own astonishing foresight. He hinted to a couple of people that often, when facing a particular individual, he would get a very strong intuitive feeling— which he apparently trusted completely as he must have understood its origin was Above— and based on it, he knew what advice to give that person. I do believe that this gave him the confidence to tell someone not to board a certain flight that would later be hijacked, to undergo or cancel recommended surgery, to keep trying to have children or to adopt, to go forward with or forget a particular shidduch, and so on.

Beyond that, he was, in my opinion, the most amazing psychologist, an exceptionally well- versed scientist, a courageous leader who did not hesitate to go out on a limb for the Jewish people, and an incredibly sensitive and caring human being. I so fervently wish that I knew 30 years ago what I know now, because I would have waited an entire day in a blizzard just to look into his eyes and physically connect to his holiness. Thinking now about that missed opportunity makes tears spring to my eyes.

But even if meeting the Rebbe is no longer possible, working on the Rebbe stories week after week for these last six years—that’s 350 weeks by now—I have often felt as if his spirit hovers over my home, and when faced with a dilemma, I ponder what the Rebbe would have advised if I could speak with him now. His influence is also felt by my Sephardic husband who recently bought me a present which he placed next to where I light Shabbat candles – a tzedakah box embossed with a picture of the Rebbe.

I cannot help but share the stories I edit, and it has gotten so that, wherever I go, people— most of whom are very far removed from Chabad— request that I “tell a story about the Rebbe.” (Now, of course, I will be able to hand out a collection of these stories just published under the title One by One. See photo.)

The other day someone asked my husband, “Has your wife been influenced by Chabad after working for them?” And he just burst out laughing. “She is not yet peeling all the vegetables for Pesach,” he said, “but you never know what’s coming.”

Uriela Obst Sagiv, a former journalist and Pulitzer nominee, has edited English- language books since 1986, first for Simon & Schuster and later, as a freelancer, working directly with many well-known authors. She has devoted herself exclusively to Jewish subjects for the past 20 years, and her favorite cookbook has always been Spice and Spirit.