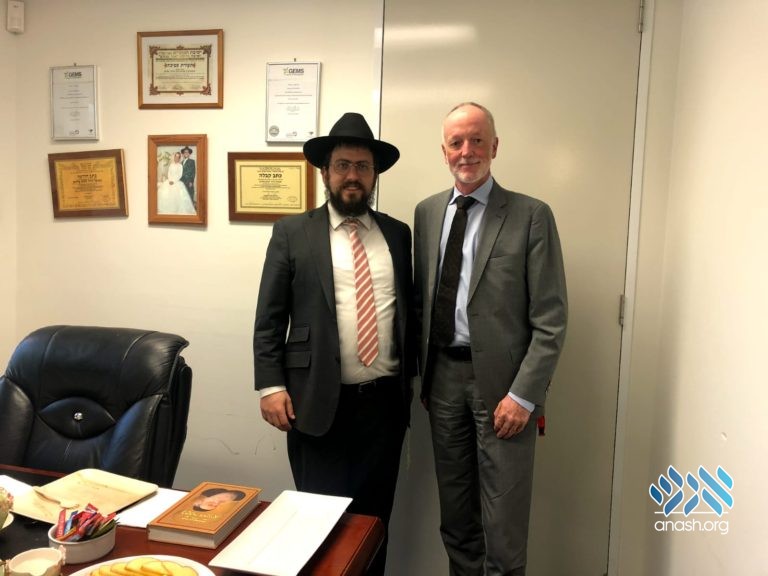 The Ambassador of Germany to Australia, His Excellency Dr Thomas Fitschen, paid a visit to the Chabad ACT Jewish community in Canberra and held a lengthy meeting with its Chairman, Rabbi Shmueli Feldman.

The friendly meeting took place as the world prepares to mark the 75th year since the liberation of Auschwitz on January 27th, designated by the UN in 2005 as “International Holocaust Remembrance Day”.

During the meeting, Ambassador Fitschen outlined efforts being undertaken by Germany in combating the recent scourge of antisemitism in Germany.

Rabbi Feldman raised additional ideas to be considered by the German Government, particularly in relation to education. Ambassador Fitschen spoke of the work of the International Holocaust Remembrance Alliance and his wish to further develop it.

In Israel, a historic number of Heads of State and world leaders are attending the 75th year commemoration ceremonies.

At an address given at a forum of world leaders today at Yad Vashem Holocaust museum, The President of Germany, Frank-Walter Steinmar said that he stands with historical guilt and warned that today’s Jew hatred seen in Europe today is the same evil as during Nazi era yet the Germans have not learned the lesson of the Holocaust.

Rabbi Feldman resolved with the Ambassador to continue regular meetings to monitor the outcomes of the recent measures Germany had put in place and to further discuss new initiatives to help the plight of Germany’s Jews.

The meeting concluded with a prayer for world peace.