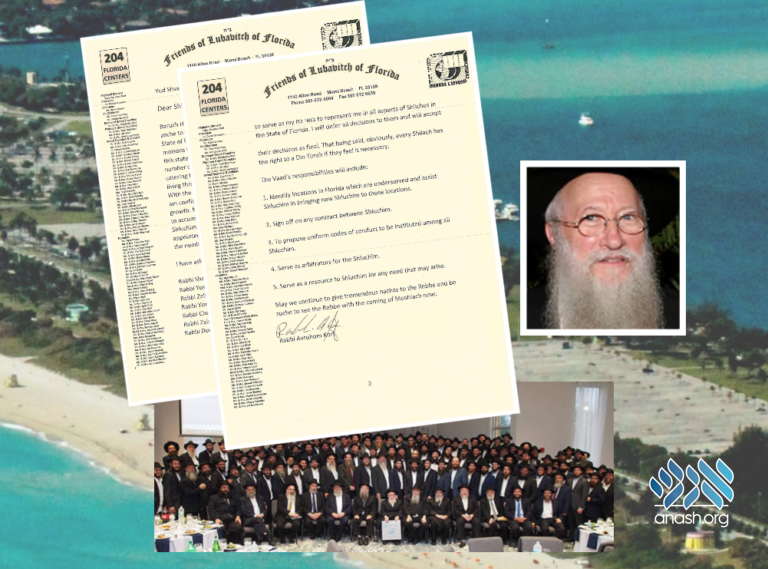 In a letter sent to Florida Shluchim, Head Shliach Rabbi Avraham Korf announced the appointment of a va’ad of Shluchim who will oversee Chabad operations in Florida.

In a letter sent to Florida Shluchim, Head Shliach Rabbi Avraham Korf announced the appointment of a va’ad of Shluchim who will oversee Chabad operations in Florida.

The text of the letter reads as follows:

Dear Shluchim of the State of Florida, sheyichyu,

Baruch Hashem, I, together with my Rebbetzin Rivka, a”h, were zoche to be appointed as the Shluchim of the Rebbe to serve the State of Florida.

Over the years we have established over 220 moisdos with over 250 Shluchim serving the needs of the Yidden in this state.

Florida, ka”h, has seen tremendous growth both in the number of Yidden moving here and with the number of Shluchim catering to their needs. We now have close to a million Yidden ka”h living throughout the state and the majority residing in South Florida.

With the tremendous hatzlachah and miracles we have witnessed, I am confident that there’s potential for continued tremendous growth.

My vision is to fulfill that which the Rebbe has appointed me to accomplish, to see to it that every single Yid is impacted by the Shluchim.

In order to do this many new Shluchim will need to be appointed and with that comes the tremendous burden of tending to the needs of all the Shluchim.

I have asked the Vaad Hashluchim,
Rabbi Sholom Ber Dubov, Vaad Chairman
Rabbi Yossie Biston
Rabbi Zalman Bukiet
Rabbi Yisroel Frankforter
Rabbi Chaim Dovid Janowski
Rabbi Zalman Levitin
Rabbi Dov Schochet
to serve as my באי כח to represent me in all aspects of Shlichus in the State of Florida. I will defer all decisions to them and will accept their decisions as final.

That being said, obviously, every Shliach has the right to a Din Torah if they feel it necessary.

The Vaad’s responsibilities will include:

May we continue to give tremendous nachas to the Rebbe and be zoche to see the Rebbe with the coming of Moshiach now.