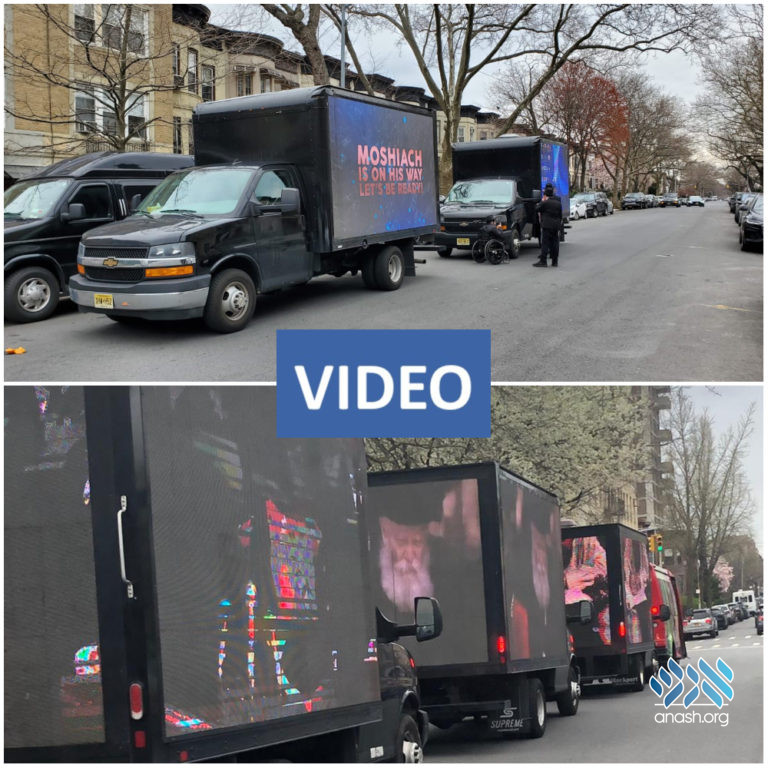 To mark Yud Alef Nissan this year, a parade of LED screen trucks will take the place of the annual Mitzvah Tank parade, bringing matzah and the Rebbe’s message to every corner of New York City.

Chassidim have always presented our Rebbe with many gifts for Yud Alef Nissan, one which stands out, is the Mitzvah Tank Parade which conquers NYC spreading the Mitzvos of Pesach to all on the Rebbe’s birthday each year.

This year, on Yud Shvat, B’Hasgocho Protis, being the Rebbe’s 70 years of leadership, a group of dedicated Bochurim took it upon themselves to make an extra Mitzvah Tank parade of 70 tanks (aside from the annual parade on 11 Nissan). Little did they know due to the COVID-19 virus, it would seemingly be the only Mitzvah Tank Parade this year!

Due to the current state of the shelter in place rules of NYC, the Mitzvah Tank Org. executive leadership went into frantic meetings to figure out how to promote Mivtzah Matzah in NYC. After much debate and consulting the Vaad of Tzach, they nailed it and came up with the idea of having a fleet of screen trucks replace the tanks and make a city wide awareness campaign, offering every quarantined New Yorker a chance to request Matzah delivered to their front door.

Unfortunately, we will not be able to put on Tefillin with thousands of Yiddin as we do at the annual Mitzvah Tank Parade, but with this idea of LED trucks with subwoofer sound systems and a fleet of vans, we will IY”H  distribute hundreds of pounds of Matzah and bring the Rebbe’s message to all sheltered in place and quarantined New Yorkers, following all shelter in place and COVID-19 restrictions.

VIDEO: Video playing on the fleet of trucks

Many Bochorim and Anash are also taking the opportunity today to video call men from their “Mivtzoim Routes” reminding them to put on Tefillin on this special day.

The fleet of LED screen trucks will disperse Sunday, Yud Alef Nissan, April 5th, and be out for a full 8 hour shift making sure that every last corner of the city is covered.

Due to the last minute organization of this campaign, the organizers are requesting the whole community be Mishtatef in this Matonas Yom Huledes for the Rebbe by making a contribution at Matzah.nyc/donate

if you have any questions or comments call us at 718-804-0077 or email Parade@mitzvahtanks.com.

The organizers hope that this campaign will end this Golus and we will march towards the Geulah Ha’amitis V’hashleima, with the Rebbe leading the way!

A project of the Mitzvah Tank Org. under the auspices of Tzach.