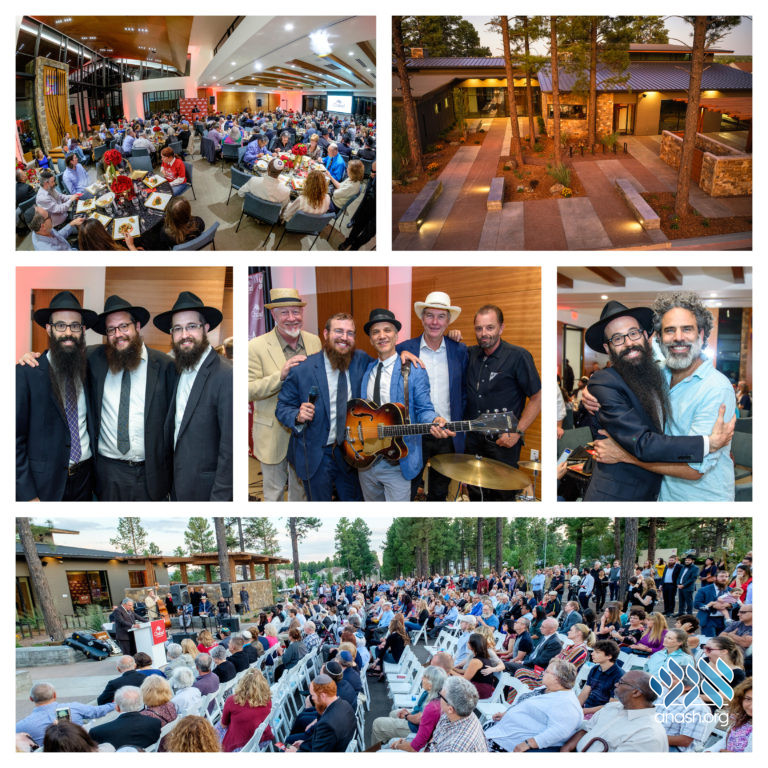 Some 13 years ago, Flagstaff, Ariz., resident Baruch Gershater heard a knock at his office door. Standing on the other side was Rabbi Dovie Shapiro, who asked if he could come in and chat. Shapiro and his wife, Chaya, were new in town as co-directors of Chabad of Flagstaff, just getting started serving local residents; tourists to the Grand Canyon and Sedona; and students at nearby Northern Arizona University.

“That meeting changed my whole life,” Gershater tells Chabad.org. He now wears a kippah, studies Jewish texts every day and has become a regular attendee at Shabbat services. “Like many people, I’m just blessed that he knocked on my door,” says Gershater, who works as a counselor and runs a building that hosts a variety of caregivers.

Gershater joined hundreds of other Chabad’s supporters on Sept. 5 to celebrate the grand opening of the Chabad’s new building: a 12,500-square-foot structure that sits on 2.2 acres of land and consists of a synagogue, social hall, kosher kitchen, mikvah, classrooms, offices and guest lodgings. He remembers when the Shapiros first operated out of their home, with the Torah in the living room; their move to a rented storefront; and the expansion of that storefront when it became too small. He talks fondly about when Chabad expanded its staff with the addition of Rabbi Shmulik Moscowitz and his wife, Yael, who joined in 2016.

“So now we’ve got this new synagogue, which is beyond spectacular—just the space, it’s phenomenal,” says Gershater, who with his wife, Wendy Weed, contributed to the building campaign. In addition to the rabbi being one of his closest friends, he says, what he gave is nothing compared to what he’s gotten from being connected with the couple and the center. “It’s just, what I’ve received, there’s no dollar sign on it,” he says. “If I had more, I’d give more.”

There was music, food and great celebration at last week’s standing-room only event, which drew guests from around the community and beyond. Mayor Coral Evans and County Supervisor Art Babbott took part in the grand opening of the Molly Blank Jewish Community Center, which is named after the mother of Arthur and Michael Blank. Arthur Blank, co-founder of Home Depot and owner of the Atlanta Falcons, addressed the crowd at the grand opening.

“In our polarized society, sadly, community centers like this are vital safe havens that bring us together, that unite us through the shared values of service, faith and love,” Blank told those gathered. “… Ultimately, the Molly Blank Jewish Community Center is about inspiration. She inspired me and my brother for many years, and now that spirit is carried on by Rabbi Dovie and all of you, to create these emotional connections that are deeply seated in our hearts and in our souls. That’s the legacy that the most inspirational person ever in my life would be proud of, my mother.”

Looking for a Place to Grow

Michael Blank, who got involved with Chabad some eight years ago when he and his wife, Carmen, were looking for a place to go for the High Holidays, has watched the Chabad center grow as more students and families got connected. It offers meaningful services in a non-judgmental atmosphere, he says. He became driven to approach his family’s foundation to support the project with his brother, and they started with an initial challenge grant, offering $2 million if congregants could raise $1 million. The project wound up costing nearly $7 million. “It would have been important [to my mother] to have a center for Judaism in Northern Arizona,” says Blank, adding that she spent time with him and his wife in the area. The brothers cut the ribbon at the gala event, and community members had a chance to tour the new facility.

Monique Bowman took her two young daughters, Talia Chaves, 8, and Emma Bowman, 2, to the event. She says she’s excited for the opportunities the new building will provide for her children and the community, hoping that the Chabad’s new space will mean even more programs for kids. “I feel like Chabad worked really hard on having that outreach, to let people know there is a Jewish community here,” says Bowman, who has been in the community for 14 years now. “Before I heard about Chabad, I didn’t know about any type of synagogue, any type of Jewish community at all.”

After the afternoon opening event, Chabad held a VIP dinner that night, and by the weekend, Shabbat dinner and services were in full swing. “Because of where we are, we’ve always been a center for people from all over the world, where people can come,” says Gershater. “Now I feel like that’s true, but in a bigger way—we’re just going to draw even more people to Flagstaff to be part of this beautiful community.”