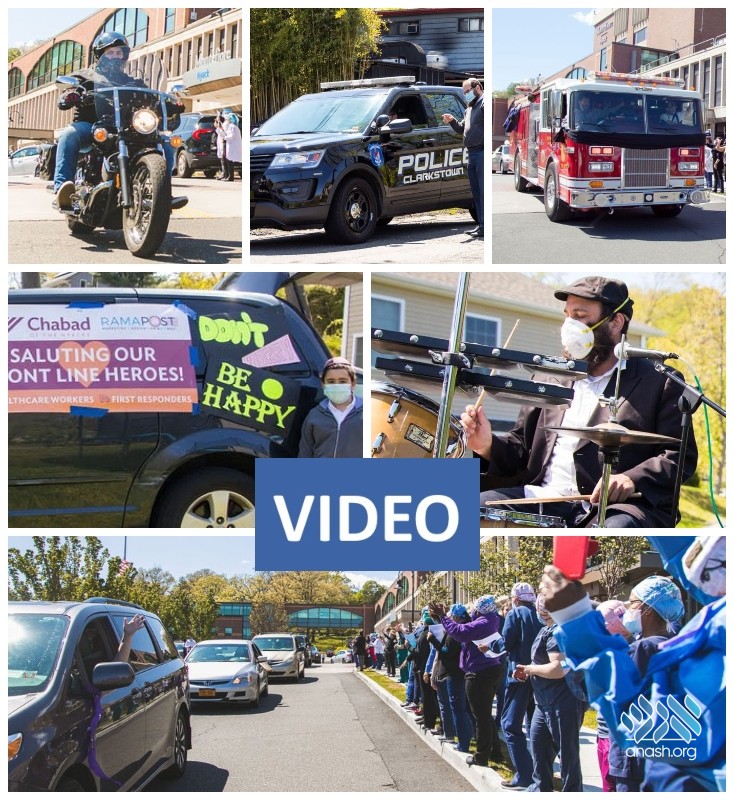 In honor of Lag Ba’Omer, Chabad of The Nyacks, led by Shluchim Rabbi Chaim Zvi (Tzili) & Chayala Ehrenreich, held a unity car parade that made a special stop by the local hospital to lift the spirits of first responders.

The unique event brought together many local families, with social distancing in place, with decorated cars to celebrate Lag B’Omer in a very special way, was led by the local Police and Fire Departments and the ‘Chesed Riders’ on motorcycles.

The parade which drove through town, up and down the main roads in the area, passed by and circled the local hospital, Montefiore Nyack. Hundreds of hospital staff members, including hospital CEO Mark Geller, lined the street around the hospital as the parade drove by, thanking and saluting the Front Line Heroes in the corona-virus battle, lifting their spirits with lots of cheer and Simcha.

Over the last two months, Rabbi Ehrenreich was very active in supporting patients and staff members at Montefiore Nyack hospital, including arranging for kosher meal deliveries for the staff and enabling families to send in food packages for their loved ones at the hospital during these challenging times.

Special thank you to all of the bochurim from Monsey, who decorated and drove floats created for the events, including: Leivik Backman, Shlomie Volfmann and others. The music float brought added flare to the parade, with Moshe Sobol performing.