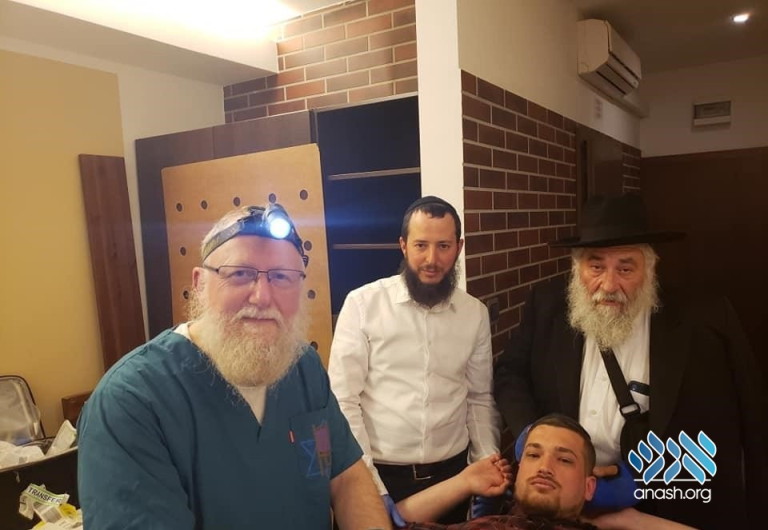 While visiting Auschwitz as part of the Eurostars trip, two students took upon themselves to have a Bris Milah, Rabbi Goldstein served as Sandek.

Every year, thousands of people travel to Auschwitz, Poland, to visit the sites of the concentration camps in which the Nazis perpetrated the murder of millions of Jews.

For many years prior to the Holocaust, Auschwitz had been the location of a thriving Jewish city, home to hundreds of families that had kept strong to Torah and Mitzvos. A bris, however, had not been recorded in Auschwitz since before the 1940’s. That is, until now.

Of the many school groups, individuals and camps that made their way to Poland this year, two individuals stood out: Eleg, 26, from the city of Vladivostok, and Peter, 18, from Krasnoyarsk, who, while visiting Auschwitz, took upon themselves to have a Bris Milah.

The two individuals were part of a the Eurostars trip, a large group of hundreds of youth from the former Soviet Union. Their trip was arranged by Rabbi Mendy Wilensky, with the assistance of Rabbi Berel Lazar, chief Rabbi of Russia.

After having spent just hours at the sites of the concentration camps, Eleg and Peter made an on-the-spot decision to have a Bris, something that they had never been given the opportunity to do so in their hometown.

Not wanting to wait until they returned home, a small team coordinated to have the circumcisions performed right there, in Auschwitz, in a hotel near the very grounds where innocent blood of millions of people were spilled 80 years ago.

With the assistance of the Rabbi Benny Wagner, the Chabad Shliach in Krasnoyarsk, together with Rabbi Mendy Blau of the Yahad program that organises trips for Russian teens that excel in their Jewish academics, Dr. Shaya Shafit, a certified Mohel who works with the Bris Yosef Yitzchak organization, was flown in and was able to utilize a room in the hotel as a mini operating theater to perform the circumcision.

The words read out during the Bris ceremony, “You shall live through your blood; and I said to you: You shall live through your blood” could not have had more significance for those assembled, including Rabbi Yisroel Goldstein, the Chabad Shliach in Poway California was also in Poland, who just weeks ago survived an attack on his Chabad House that took the life of one congregant and left him without a finger. He, together with, Mr. German Zakharyaev, Vice President of the Euro-Asian Jewish Congress, were honored with being the Sandek at the two Bris ceremonies.