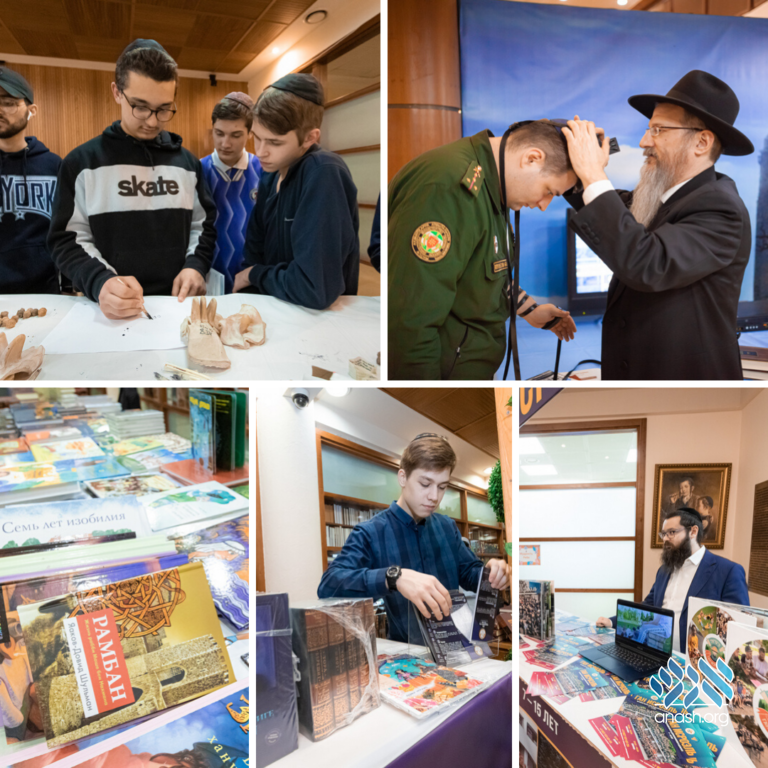 Moscow’s large Jewish Community Center in the Marina Roscha district has seen many different kinds of events, but what happened at the beginning of this week was completely something else: crowds arrived from all over the city in order to participate in the first-ever “Yiddishkeit and Chassidus Fair”.

All seven floors of the entire building, thousands of square meters, dozens of rooms, halls and foyers were all filled with stands and expositions explaining Yiddishkeit!

The idea was first cited by the Chief Rabbi of Russia, Rabbi Berel Lazar, and was successfully executed by the director of the Marina Roscha community center, Rabbi Mordechai Weisberg. Together with a winning team of shluchim from the capital, they produced this one of a kind event which made great waves in Moscow’s Jewish community, bringing knowledge of Yiddishkeit to the masses, many for whom it was their first exposure to such information.

The stands and booths throughout the building were all based on the “Ten Mivtzoim”, ten mitzvah campaigns that were introduced by the Lubavitcher Rebbe. Now, to commemorate seventy years of his leadership, Russia’s Jews, which were always so close to his heart, dedicated this special event in his honor.

The main sanctuary was filled from wall to wall with Jews who came to get a taste of Jewish life whether by catching a Torah class or studying in-depth with a study partner. Throughout the day there was a variety of classes and workshops on a plethora of Jewish topics for all ages and stages, until the day’s successful conclusion in the evening hours.