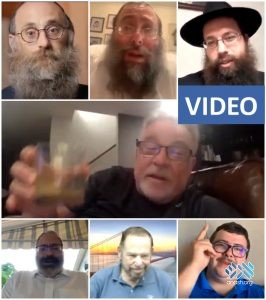 Friends and supporters of Chabad Lubavitch of Quad Cities (lowa/Illinois) led by Rabbi Schneur and Chana Cadaner gathered virtually to celebrate the outstanding achievement and the fifteen year anniversary milestone.

This fifteen year anniversary also celebrates Chabad of the Quad Cities’ tremendous impact on the community through it’s innovative programming and personal connections.

“It’s hard to believe that it has already been fifteen years. We’ve accomplished so much in a relatively short period of time, it’s been an ongoing campaign to add goodness and light,” said Rabbi Shneur Cadaner, director of Chabad Lubavitch of the Quad Cities.

“It is our hope and prayer that the next fifteen years will be met with an equal amount of success and more.”

Chabad Lubavitch of the Quad Cities began with humble beginnings, learning how to best meet the needs of the community and has flourished into what it is today.

The fifteen year anniversary celebration was held as a virtual event because of restrictions brought about by Covid 19, but as a result it was also
attended by many friends who no longer live in the Quad Cities.

The event was followed by a match campaign that exceed all expectations.

To donate to Chabad of Quad Cities, click here.