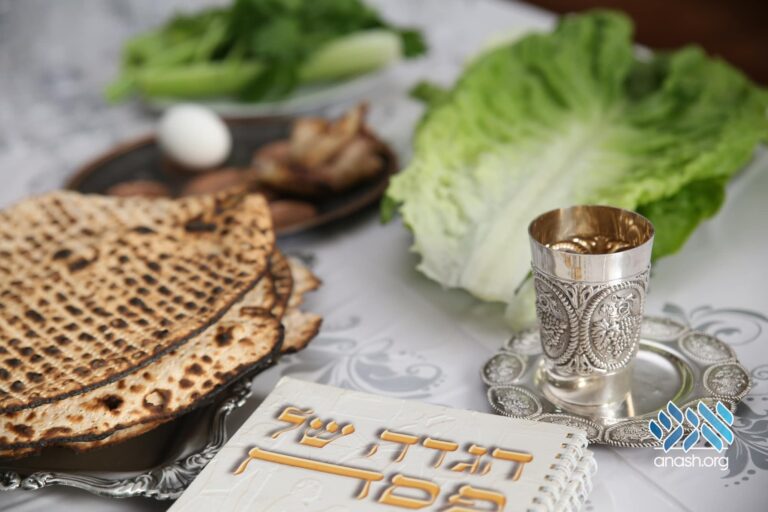 At his seder one year, the Shpoler Zeide explained the children’s chant for Kadesh as a plead to Hashem to take His children out of golus while they are still awake.

The customs of the seder night are ancient and profound. For example, there is a mnemonic device that has been taught for a thousand years to help remember the fifteen parts of the seder. It begins: “Kadesh, urchatz…etc.,” and means “Recite the kiddush, wash the hands…,” etc. It has been the custom over the many generations for teachers to instill these words in the minds of their tiniest students, who then recite them on the seder night, explaining each of them in the Yiddish vernacular.

The first word, “kaddesh” is explained, ‘When Father comes home from shul on the evening of Pesach he must say the kiddush right away so that the little children don’t fall asleep without saying the Four Questions, beginning ‘Mah Nishtana.'”

It so happened one year in the home of the Shpoler Zeide that his small son began the recitation with the word “kaddesh” and proceeded with the Yiddish explanation, saying, “When Tatty comes home from shul on Pesach night, he must recite the kiddush immediately.” His explanation, however, went no further, and his father asked, “Why don’t you continue?”

“My teacher didn’t tell me anything else to say,” replied the child.

The Shpoler Zeide then proceeded to tell his son the rest of the explanation, which continued: “…so that the little children won’t fall asleep and will ask the Four Questions beginning with ‘Why is this night different from all other nights?'”

On the second night of Pesach the boy’s teacher was among the guests at the Shpoler Zeide’s table, and the tzadik asked him, “Why didn’t you teach the children the rest of the explanation of the word ‘kaddesh?'”

“Oh,” he replied, “I didn’t think it was so important for a little child to know. Anyway, that’s not the most important part of the explanation.”

The Shpoler Zeide was upset by this reply, and said, “How do you dare to take it upon yourself to alter the venerable customs of our illustrious ancestors? You simply don’t understand the depth and profundity of this teaching. Listen, and I will explain the inner meaning of those words:

“The words ‘recite kiddush and wash the hands,’ these are the introduction to the whole seder. In the Zohar it is written that Rabbi Chiya opened up his discourse with the words from the Song of Songs ‘I am asleep but my heart is awake,’ meaning ‘I am asleep during the Exile.’ During the long Exile the Jews are as if asleep, lacking the heights of spiritual sensitivity.

“The true meaning of the children’s words, then, ‘When Father comes home from shul on Pesach night’, is ‘When our Father in Heaven returns to His Abode on High and He sees that all the Jews–no matter how exhausted from their preparations for the holiday–all go to pray and give thanks to Him,’ then: ‘He must recite kiddush right away,’ which is to say, G-d must renew His vows of betrothal to His deserted bride, the Jewish People, as it says in the prophet Hosea: ‘And I will betroth you to me forever.’

“And what is the reason He must do this with haste? That is explained, ‘So that the little children won’t fall asleep.’ The prophets often refer to the Jewish people as the small, precious children of G-d. The Alm-ghty must act immediately to redeem His people, lest the deep sleep of the Exile totally overwhelm them (G-d forbid), and they cannot be awakened, so that the Redemption would be impossible.

“The end of the phrase, ‘So that they will ask the question ‘Mah nishtana…’ Why is this night different from all other nights?’ is explained as follows: We ask ‘Why is this terrible, dark Exile longer than all the other exiles we have previously endured?'”

As he uttered these words the Shpoler Zeide couldn’t contain his emotions and he burst into bitter tears. “Our Father in Heaven, redeem us quickly from the exile while we’re only in a kind of half sleep and our hearts still remain awake! Don’t wait until we fall into a sleep so deep that we cannot be awakened!”

Everyone who witnessed this scene was shaken to his core with the desire for repentance, many weeping from the depths of their souls.

The Rebbe then abruptly interrupted this sad mood saying, “Kinderlach, children, let’s have some liveliness and give our Father a little “nachas.” Let’s show Him that His little children can dance and be joyful even in this deep darkness!” And with that, the tzadik began to whirl and turn in a dance of spiritual rapture.