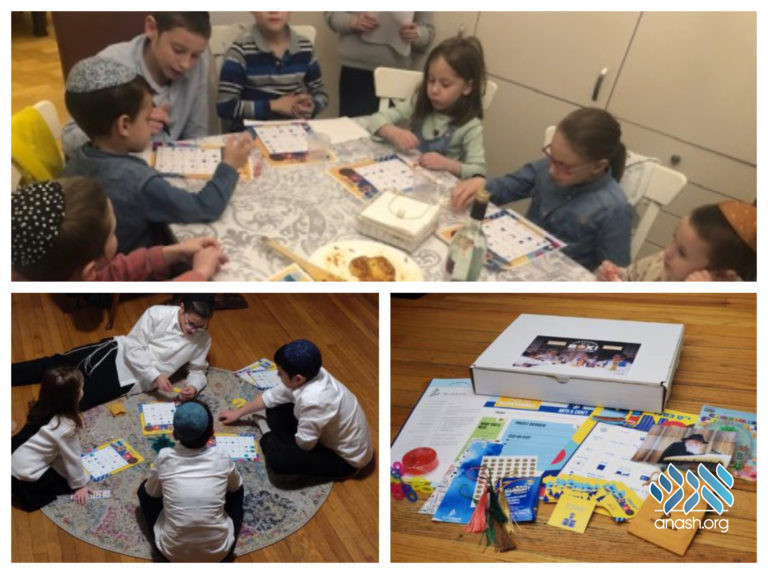 MyShliach’s “Farbrengen in a Box” has once again brought the chayus of Yud Tes Kislev to hundreds of Shluchim families across the globe.

Mendel hung up the phone with his MyShliach chavrusa, invigorated with the energy of the Yud Tes Kislev sicha he had just finished learning. “Ta!” he called out. “Can we have a farbrengen?”

Several hours later, Mendel and his friend Levi from the neighboring state sat side-by-side with their families and a couple bowls of nosh. “Mendel, are you ready?” asked his father. Mendel nodded his head and began.

He read the powerful story, raising and lowering his voice as the poignant lesson penetrated. He and Levi led the niggun together, being swept away by its depth. He gave his family and friends the pieces for the game, and called questions about what they had discussed to see who could answer. Levi handed out the tickets and prizes, and before the farbrengen ended, they both helped everyone with their unique craft that would always remind them of this special farbrengen.

Farbrengen in a Box doesn’t have anything typical about it. It’s been specially designed and crafted to thought-provoke and inspire the shluchim families that use it, to bring home the true message of the Yoma Depagra. And whether your little Mendel speaks English, Spanish, or Hebrew, Farbrengen in a Box will be able to make this special day one that he’ll always remember.

“A Yoma Depagra is a time to get together with one’s family, and if possible with other families as well, for a farbrengen. With Farbrengen in a Box you have a complete package ready for you, with every detail thoroughly prepared for a most special farbrengen,” says Rabbi Mendy Kirshenberg from MyShliach

MyShliach is preparing their upcoming edition of Farbrengen in a Box in honor of Yud Shevat, 70 Years of the Rebbe’s Nesius.

Please visit www.myshliach.com/box for information on how to order.