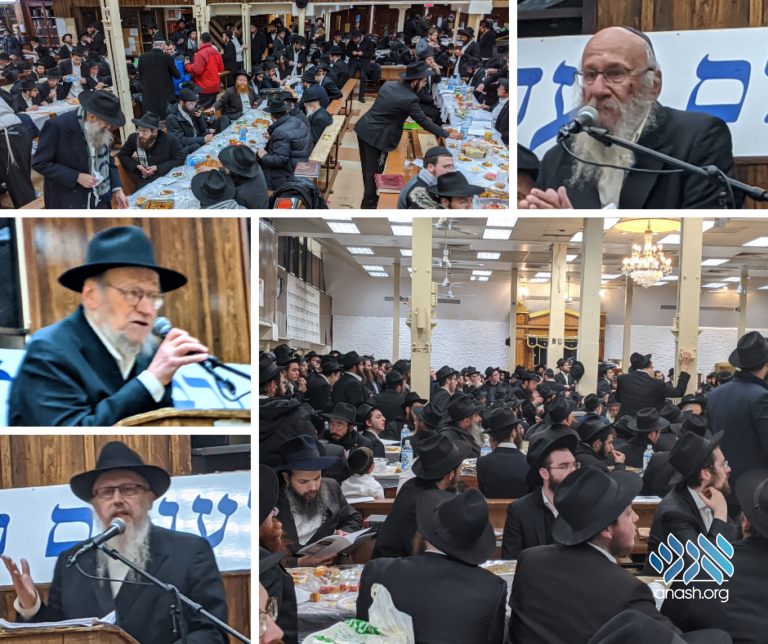 Anash and bochurim gathered at 770 on Motzei Shabbos for a farbrengen to celebrate the Chag Hageulah of the Mitteler Rebbe on Yud Kislev.

At the farbrengen, Rabbi Schwei spoke about the importance for slower davening and he shared the following story:

For many years I served as a melamed in the Lubavitcher Yeshivah on Bedford and Dean. The talmidim would travel to Yeshivah from Crown Heights and elsewhere by a city bus. Since the bus stop was a short distance from Yeshivah, I would accompany the young bochurim on their walk and used the time to talk with them.

Once while I was walking with one of the students, we discussed the topic of Davening. How davening must be less rushed, and with more kavanah. I told the bochur the following mashal: “Our davening is in place of the korbanos of the Beis Hamikdash. A korbon has two requirements: Firstly, the animal’s body must be whole, with all the limbs intact and without any blemishes. Secondly, it must have a whole soul – simply that the animal must be alive.

“Similarly, when one davens, he must ensure that both the body and the soul are complete. The words are the body of davening, and they must be complete, not missing any words and not mispronouncing them. If words are missing or blemished, it is like a baal mum (blemished animal) which is unfit to be brought up on the mizbeiach. The kavana and understanding of the words are the life of davening. These are also essential to the validity of the tefilah.

“While there are many levels in this aspect, at least a basic intention of davening to HaShem is necessary.”

A short while later this bochur, who interestingly was not in my class, went in to yechidus by the Rebbe and the Rebbe spoke to him about the significance of davening and told him this exact mashal about the karbanos.

When the Rebbe concluded, the Rebbe asked the bochur if he had heard this vort before. The young bochur replied in the affirmative: “Yes, I heard it from Rabbi Schwei…” The Rebbe smiled.