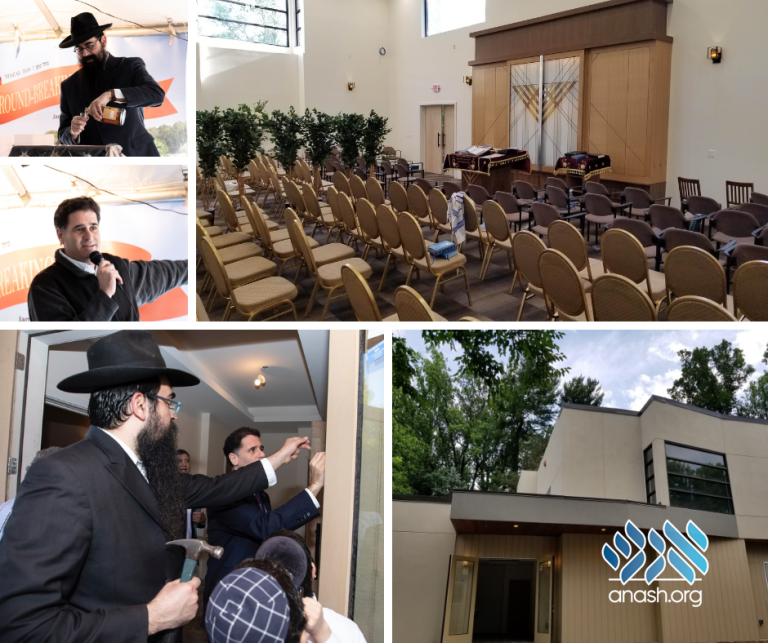 It was a double coming-of-age celebration as over 200 people entered the brand new <b>Chabad Jewish Center of Bethesda, MD</b> this past Shabbos.

The beautiful new building was dedicated to the memory of the beloved late shlucha of the Bethesda-Chevy Chase community, Mrs. Zlata Geisinsky OB”M. With its soaring ceilings, magnificent Aron Kodesh and large shul, it was the realization of a community’s dream ten years in the making.

On its inaugural Shabbos, the new Center hosted the Bar Mitzvah of one of the sons of Rhoda and Ron Dermer, the Israeli Ambassador to the United States.

A little over 6 months ago, Ambassador Dermer approached Rabbi Sender and Nechamie Geisinsky, directors of Chabad of Bethesda, asking about the plans and timeline for the construction of the new Chabad Center. The Bar Mitzvah of their first son, he explained, was held in Jerusalem and their second son celebrated in his hometown of Miami Beach.

However, as Chabad of Bethesda had been their family’s spiritual home since their arrival back to the US, they felt it would be meaningful to celebrate their upcoming simcha in the new center. The Geisinskys assured them that if this was their desire, they were committed to having the new shul ready in time.

At that point, the new Center was still only in its planning stage; thus began an almost impossible race against time. Building permits were completed and filed, construction plans were approved and a general contractor hired. He agreed to complete the project within the expedited timeline, provided that a bonus would be given.

On Yud Shvat (January 15th) of this year, the ground was broken at the new location amid much celebration and excitement. Records (and stereotypes!) were broken as contractors and shluchim worked in unison to complete a building project on schedule.

Through the snow and sleet of winter, demolition and excavation of the site progressed. The concrete was poured and wrapped in blankets at night to preserve it against the freezing cold. As the weather began to thaw, the frame of the building went up.

With the arrival of Pesach came the plumbing, duct work, and electrical wiring, providing a unique companion to the Sefirat Ha’omer countdown. In fifty days, it would be Shavuos; in fifty days, the new building needed to be ready for final inspections.

The project shifted into overdrive, with many nights seeing the crews still on the site at 2:00 am. The crew was pulling out all the stops to realize the community’s dream, and to achieve it within the miraculous 150 day timeline!

The morning before the Bar Mitzvah arrived, with the construction site still far from completion. The stone façade that was to cover half of the front of the building was not going to be delivered in time; there was no carpet over the bare concrete floor in the sanctuary; one of the main exit doors still had not arrived, and only half of the tiles had been laid in the entrance foyer.

Rabbi Geisinsky assured a worried Dermer family that they had nothing to fear. While Chabad was never early, he said, they can always be counted on to get the job done.

Sure enough, by 7:02pm (2 minutes after the event’s scheduled start time – and right on time by Chabad standards) the carpet was in, the door in place, and the floor tiled. And, to everyone’s amazement, the final nail was being knocked into the temporary façade at the front entrance of the beautiful new center. Miracles of miracles, they had done it!

As the sun began to set, friends and family of the Bar Mitzvah boy joined members of the community to celebrate the beautiful simcha. Just before Shabbos began, Israeli Ambassador Dermer presented Rabbi Geisinsky with a special gift for the shul: a beautiful mezuzah case fashioned from a rocket from Israel’s Iron Dome defense system.

Many became emotional as the rabbi, the ambassador, and his son affixed the mezuzah to the door of the new center; then, for the first time, the crowd entered their new home through that very door. American and Israeli dignitaries joined the community for rousing tefillos both Friday night and Shabbos day.

As the Bar Mitzvah boy masterfully completed his reading of the Torah, cries of Mazal Tov filled the new shul, celebrating the coming-of-age milestone of one Bar Mitzvah boy and one Chabad community.