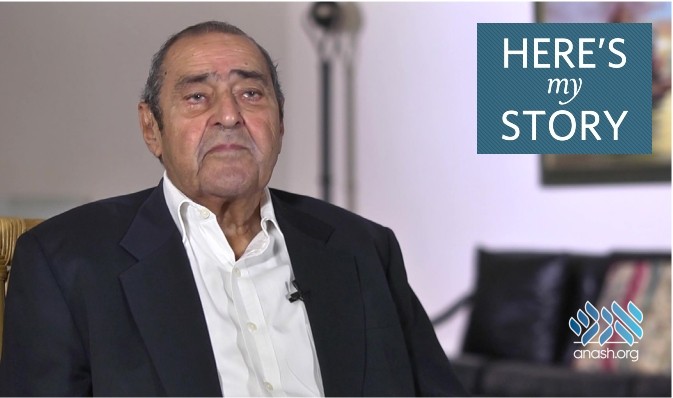 Born and raised in China, Mr. Freddy Ezekiel didn’t give much thought about the future of Judaism if the Far East. A meeting with the Rebbe changed all that.

For thirty years (from 1980 to 2010), Mr. Freddy Ezekiel was a supplier of electronics to South America. He was interviewed in his Miami home in April of 2018.

I was born in Shanghai, China, where my grandfather – Judah Abraham – served as one of the leaders of the Sephardic community. In 1948, when I was twenty-one, I moved to Hong Kong where I stayed until 1963 or so, and then I immigrated to London. That is where I got married and lived until moving to Miami nearly forty years ago.

Back in 1962, while still living in the Far East, I attended a Bar Mitzvah of a relative in New York, where I met a number of young chasidic rabbis, one of whom – I later surmised – must have reported to his Rebbe that a Jew from Hong Kong was in town. At that time, I was staying in Brooklyn with my friend Benny Fishoff, who had lived in Shanghai during the war years, and a message came to his house that the Lubavitcher Rebbe would like to meet with me. I had no idea who this was – and I remember putting my hands over the telephone speaker and whispering to Benny, “Who is the Lubavitcher Rebbe?”

It was a surprising meeting. I recall that, when I walked into the Rebbe’s office, what immediately struck me was the simplicity of the room, which was dominated by a desk with a gentleman sitting behind it. As I entered, he rose to greet me and shook my hand.

He asked me questions about myself and he also spoke of his own background, and from that point, we began discussing our shared Jewish heritage and how that is observed by the different communities throughout the world.

While we were talking – he spoke an excellent English, by the way – I looked at my watch several times, not wanting to overstay my welcome. After hours passed – when it was eleven, and then when it was eleven-thirty, and then twelve – I got worried. But the Rebbe said, “Don’t worry about the time – we still have much to talk about.”

He wanted to know all the details. He asked me many questions about how the various communities got along, about their traditions, about the existing infrastructures – the synagogues, the schools, the mikvehs etc.

I recall telling him how Shanghai changed with the outbreak of the Pacific War in 1941. Up until then, Shanghai was in Japanese hands, and it was a thriving city, with a prosperous Jewish community which looked after the thousands of refugees who fled from Nazi-occupied Europe. But the Pacific War disturbed everything. When it ended, and the Chinese Communists came into Shanghai, all the Jews left so that, by the time I was speaking with the Rebbe, the Jewish community there was nearly extinct.

Obviously, he had a far-reaching vision of how things would change in the coming decades, and he was thinking ahead. I have to say that it never occurred to me to wonder what the future would hold for Yiddishkeit in the Far East. The thought didn’t cross my mind. Whereas, clearly, it had been on the Rebbe’s mind. He was already anticipating how the world would change, and he must have been thinking not just how to preserve some of the dwindling Jewish communities in Asia but how to develop them.

Today, there are thousands of Jews in Shanghai. And Chabad is there – with three Chabad centers – to give them all the strength they need. In Hong Kong there are now five strong communities with five synagogues and two Chabad centers. Whereas in 1962, it was hard to get a minyan together. In total, Chabad has thirteen centers in China!

The Rebbe saw into the future and the starring role that Chabad would come to play in these communities. Indeed, he gave me a clue of how he envisioned that happening, but at the time I didn’t fully grasp his intention.

I remember that he told an anecdote about a lake, the water of which was completely smooth, except when someone would throw in a pebble. Then the still waters would ripple out in concentric circles, spreading through the entire lake. When he related this anecdote, he said, “This is what Jewish influence is like. No matter how small a pebble you drop into the water, the ripples reach the furthest edges.”

Later, as I learned more about the Rebbe and Chabad, I asked myself the question: How did the Rebbe come to have so much influence over so many people? And this anecdote provided the answer. It all came down to the ripples he created and how they spread throughout the world.