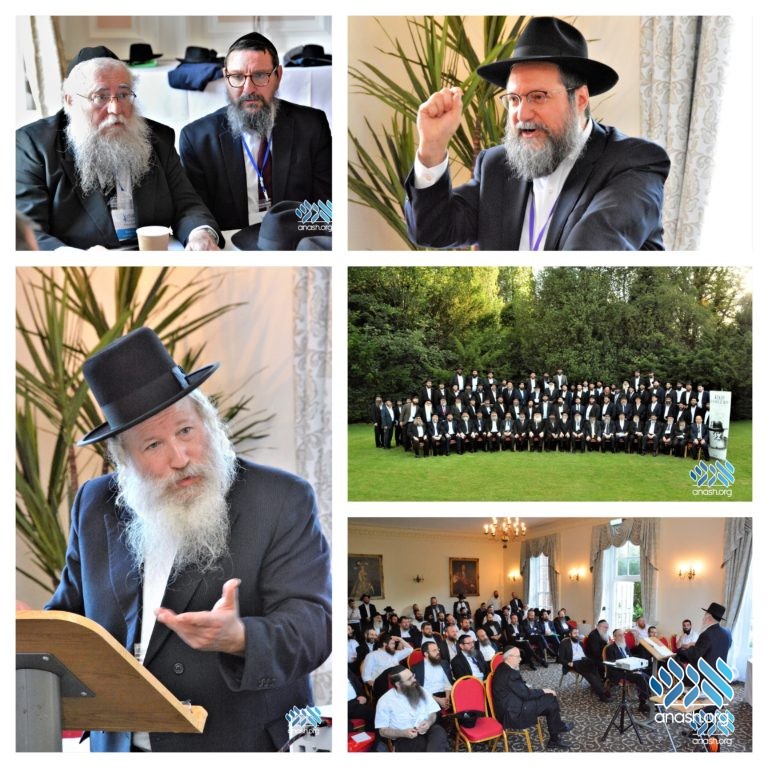 Lubavitch UK celebrated 60 years of growth with kinus. The shluchim were addressed by the Chief Rabbi and other prominent Rabbonim. Shiurim, farbrengen’s, workshops and lectures were held for the benefit of the shluchim.

Market Bosworth in Midland UK, the venue for many gatherings, was once again the scene of a very special Kinus Hashluchim with an emphasis on marking 60 years since Rabbi Nachman Sudak, a”h, together with his Rebbetzen Mrs. Fradel, tblch“t, arrived in London to establish Lubavitch in the UK.

Building on the excellent foundations already laid by his father in law Reb Bentzion Shemtov, a”h, Lubavitch began to steadily grow and now boasts over 130 Shluchim. From Bournemouth in South England to Cardiff in Wales to Edinburgh in Scotland not forgetting Dublin in neighboring Ireland, Lubavitch is recognized as an integral part of Jewish life. This was reflected in the tributes paid by both emeritus Chief Rabbi Sacks and current Chief Rabbi Mirvis to the Rebbe and Lubavitch in the run-up to Gimel Tammuz the 25th anniversary of the Rebbe’s passing.

On Monday morning, Chof Ches Sivan, shluchim began descending on this rural English village. From registration to departure the entire Kinus was directed with military precision by the shluchim to Solihull Rabbi Yehuda Pink, Chair of the Vaad Hakinus and Rebbetzen Dinie Pink. Rebbetzen Pink also took care of the entire array of splendid menus to suit a now more health discerning clientele. Shluchim were treated to lectures and workshops on a broad variety of subjects to cater for those in the field of chinuch, campus work, rabbonim of shuls or Chabad house shluchim.  Renowned Mashpia Rabbi Aaron Dovid Gancz of Morristown, who flew in specially for the Kinus, spoke on raising a chassidisher family.

The Kinus was greatly enhanced by the input of Rabbi Efraim Mintz, Executive Director of JLI (Jewish Learning Institute) and Rabbi Mordechai Dinerman, Co-Director of Curriculum of JLI who delivered sessions on how to implement the Rebbe’s directive to permeate the world with the learning of Torah and how to maximize the impact of Shiurim on Baalei Batim.

There was a workshop by the CST (Community Security Trust) on how they can partner with the Shluchim to protect Chabad Houses. This was followed by an in-depth Shiur from Dayan Levi Yitzchok Raskin, Rov of Anash in North London, on the halachos of Shabbos and Security. The shiur was particularly enjoyed by the team from CST who were fascinated to hear clear rulings on what is and isn’t permitted while performing security duty on Shabbos. Rabbi Dr. Naftoli Loewenthal gave a fascinating workshop on the importance of Avodas Hatfilah while on Shlichus. There was an array of other topical and practical workshops by Shluchim and professional presenters.

The evening banquet was opened with a welcome by Rabbi Pesach Efune, Chair of the Trustees of Chabad Lubavitch UK, who announced an expansion of the Hanhalla of the Mossad to bring in fresh blood and ensure that the massive expansion of Lubavitch UK could be properly managed. He was followed by a Dvar Torah by Rabbi Yossi Baitz, Shliach in Kentish Town. This was followed by six short speakers introduced by Rabbi Bentzi Sudak, each one covering a decade of the sixty years since the establishment of Lubavitch. Rabbi Sudak said that the best tribute to the work of the past 60 years was to look forward to the future and continue to expand the network of Shluchim in the UK.

Rabbi Yitzchok Sufrin remembered sharing a desk with Reb Nachman, a”h, in a cramped front room of the first Lubavitch House, while Rabbi Chaim Jacobs of Glasgow recalled going to one of Reb Bentzion Shemotv’s chadorim simply because they lived on the same street. The evening was enhanced by music courtesy of Rabbi Yonosan Golomb of Sheffield who brought along his keyboard while Rabbi Eli Levine sang, helped by Rabbis Mendel Sufrin and Naftoli Tiefenbrun. Later in the evening, everyone got up to dance in a warm spirit of achdus.

The highlight of the kinus is always the farbrengen and Rabbi Gancz left no one disappointed. Well into the night he kept all the shluchim engaged with divrei Chassidus and stories many from his own personal experiences in coming to the Rebbe and Lubavitch. By the time he drew to a close at almost four in the morning, the early rays of dawn were already starting to appear over the horizon.

Before Shacharis Rabbi Golomb led a shiur of Chassidus and the morning continued with more workshops and lectures.  The kinus concluded with a JLI regional conference and shluchim went their separate ways.

A wonderful atmosphere pervaded the entire Kinus as ‘ish es chavero yazoru’ which no doubt was the inspiration that was taken home by all those who participated. A big thank you to the Vaad HaKinus.