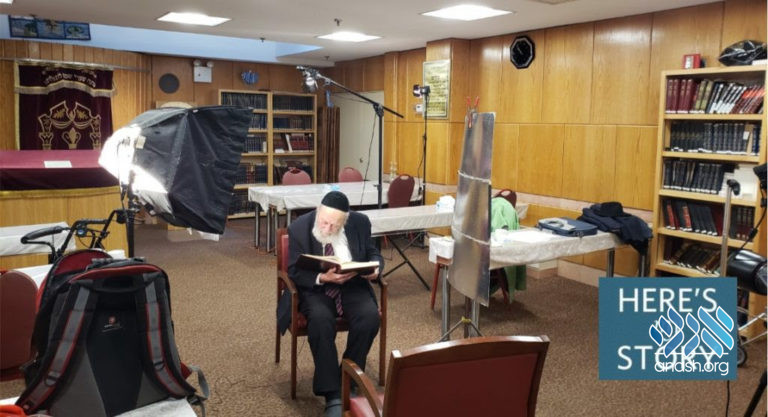 After leading congregations in Washington DC, Jersey City, New Jersey, and Norwich, Connecticut, Rabbi Sidney Shulman worked as a stock broker for over forty years. He was interviewed in December of 2019.

I was educated at the Yeshivas Ner Yisroel in Baltimore, where I received my rabbinic ordination. After I married and started a family, I accepted a job as the spiritual leader of the Beth Jacob Synagogue in Norwich, Connecticut.

Every year, Rabbi Yosef Wineberg, a fundraiser for the Lubavitch yeshivah would come to Norwich collecting money, and on one occasion I asked him a question which was bothering me at the time. It was concerning the opinion of the Shach (a prominent 17th century commentator) regarding the Laws of Oaths, and when I explained my question, he responded that for a matter of such complexity, I needed to write to the Rebbe.

Initially, I was reluctant to write. To begin with, I was not a Lubavitcher, and I thought that the Rebbe must get letters from all over the world, so would he have the time to answer me?

But, back then – this was in the early 1950s – a stamp cost three or four cents, and I had nothing to lose. Worst thing that could happen, I would not get an answer. And, in fact, the Rebbe never wrote back.

Subsequently, I left the rabbinate and went into the world of finance. A few years passed, and then a friend of mine, a Russian Jew who had immigrated to Israel, came for a visit to New York and said he’d like to meet the Lubavitcher Rebbe. He got an appointment for the middle of the night – 1 a.m. or thereabouts – and we went together.

When we entered, the Rebbe stood up to greet us, and I introduced myself as the former rabbi of a congregation in Norwich. His reaction surprised me: “I know who you are. Didn’t you once write to me?” he asked.

And then he proceeded to answer in great detail the question which I had asked him years earlier. I no longer remember exactly what he said, but I do recall that he drew on the writings of the Tzemach Tzedek (the third Chabad Rebbe) to address the question I had raised.

I was stunned. The Rebbe had seen my letter four or five years prior, yet he remembered exactly who sent it and what my question was as if he read it yesterday!

On this occasion, I had a question concerning something the Rebbe began speaking publicly about shortly before the start of the Six Day War. Just as the Arab nations surrounding Israel were escalating their threats against the fledgling Jewish State and it became clear that war was imminent, the Rebbe launched his mitzvah campaign to get as many Jews as possible, especially Israeli soldiers, to put on tefillin. Based on a statement in the Talmud that those who put on tefillin will live a long life, he said that the tefillin would confer protection on those whole fulfill the mitzvah and, in fact, on the entire IDF. He added that just as war is a team effort, the tefillin worn by a single soldier has a collective effect on the entire army, and the tefillin donned by any Jew throughout the world helps the Jews in the Land of Israel.

To my mind, the Rebbe’s rationale seemed to contradict the opinion of Maimonides, the great 12th century Jewish philosopher and codifier of Jewish Law also known as the Rambam. So I wrote to him about it, noting that – while discussing the mezuzah and the protection it offers to the home when it is affixed to the doorpost – the Rambam said that you don’t affix a mezuzah for the purpose of protection, but to fulfill G-d’s commandment. If you do it for protection, then you are denigrating the mezuzah by turning it into an amulet. It seemed to me that what the Rebbe had said about the protection of the tefillin seemed to be in the same category.

A week or two later, I received a reply from the Rebbe which was quite complex, containing many details, citations from the Talmud and the Rambam, as well as from several commentaries. In short, the Rebbe explained that I had misunderstood what the Rambam had said and that his own reasoning did not contradict the Rambam at all. He pointed out that the Rambam was speaking about adding words to the mezuzah which would invalidate it and turn it into an amulet, and not at all about the Jew’s intention in fulfilling a mitzvah.

The Rebbe also quoted other writings of the Rambam where he clearly states that it is permissible to do a mitzvah for ulterior motives. The Rambam further states that one must influence others to serve G-d, even if they are doing so merely for their own benefit and to “encourage them and strengthen their intention.”

Additionally, the Rebbe pointed out that when a Jew puts on tefillin and recites the requisite blessing beforehand – stating that G-d commanded us to perform this mitzvah – he is certainly doing it for the sake of Heaven, his recitation of the blessing being the proof. Although he may still have his own interests at heart, these can be considered additional intentions and not necessarily the main one.

I am mentioning here just the highlights of a most impressive exposition. And I would just like to note that while many people know the Rebbe as a Jewish leader who had a global impact on Jewry as we know it, I personally came to realize that he was also a scholar of world eminence. And my correspondence with him is my evidence.

The full text of the Rebbe’s letter to him can be found in Likkutei Sichot vol. 6 page 276.