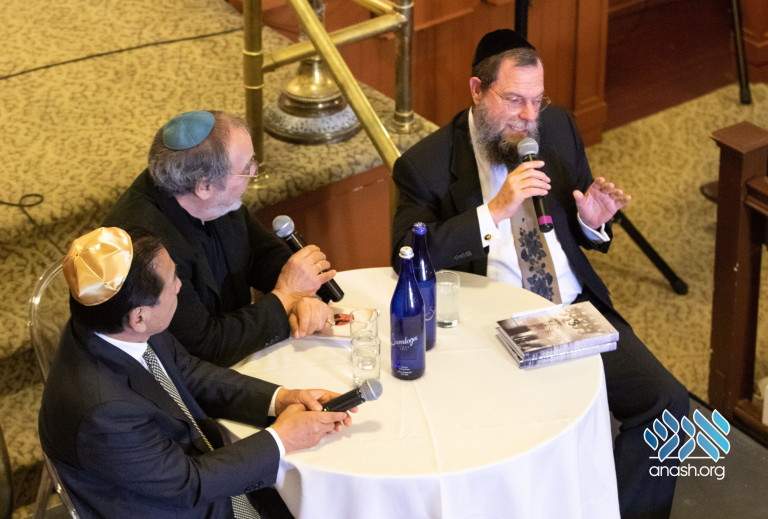 ‘From Kovno to Kobe,’ an event paying tribute to the heroic legacy of Chiune Sugihara, took place this week in the sanctuary of B’nai Abraham – Chabad, Philadelphia’s oldest shul.

It was a most memorable evening for all in attendance. A historic meeting was taking place between Nobuki Sugihara of Brussels and Rabbi Yossy Goldman of Johannesburg, who had traveled across the world to meet for the first time. They came to reflect on the lives of their respective fathers, and the lessons to be learned from their incredible story.

The meeting between the son of rescuer Chiune Sugihara and the son of Rabbi Shimon Goldman, a survivor he rescued, was orchestrated by Rabbi Yochonon Goldman, shliach of Center City Chabad and spiritual leader of B’nai Abraham. Rabbi Goldman invited his community to witness the conversation as they each shared their reflections on the riveting story of heroism and survival. Rabbi Yochonon Goldman said, “It is important that we never forget Sugihara’s heroic act and understand the power of one individual to transform our world for the better.”

The story of Chiune Sugihara is remarkable, and one that is not told often enough. It was the summer of 1940, and the Soviet Army had annexed Lithuania and requested that all foreign diplomats leave. Sugihara, vice consul for the Japanese Empire in Lithuania, was packing when a Jewish delegation asked to see him with a desperate request — to issue Japanese transit visas allowing them to safely exit the Soviet Union. No one wanted to grant them passage or take them in.

Sugihara agreed, and, soon after, thousands of desperate refugees descended on the courtyard of the Japanese consulate, pleading for help.  Unfortunately, when he requested Tokyo’s permission to help them, he was declined – only refugees with proper funds and pristine papers would be granted passage.  Undeterred, he sprang into action and began issuing visas at his own initiative that allowed their travel through Japanese territory.

In the brief few weeks before the consulate closed and Sugihara was forced to leave Kovno, he helped some 6,000 Jews flee Europe. This he did at great personal risk, acting against the orders of his superiors. The visa recipients included many rabbonim and talmidei chachomim.  Shimon Goldman, grandfather of Rabbi Yochonon Goldman, was at the time a talmid of the Lubavitcher Yeshiva in Vilna who was among those provided with a life-saving visa. Those rescued went on to have many children and grandchildren; tens of thousands of Jews around the world are alive today thanks to the actions of Sugihara, who was recognized by the Yad Vashem Holocaust Museum in Eretz Yisroel.

Rabbi Goldman began the program with the message of Pesach Sheni: it’s never too late to make up for that which we may have missed out on earlier. The Goldman family had never before had the opportunity to personally thank the Sugihara family for Chiune Sugihara’s role in saving their father and grandfather, who was the sole surviving member of his family. Nito kein farfalen – it’s not too late to say thank you! It was a very emotional moment for the community to witness.

A guest dignitary, Ambassador Kanji Yamanouchi, Consul-General of Japan in New York, brought greetings and expressed how delighted and moved he was to be able to participate in recognizing Chiune Sugiahara’s extraordinary legacy of selflessness and courage.

Nobuki Sugihara shared that his father did not have any idea that these visas would end up saving so many lives. He thought that only a handful would survive the difficult ordeal of getting from Lithuania through Russia and eventually to Japan. It was only years later that a survivor tracked him down and he actually met a group of survivors. He eventually learned that several thousand Jewish lives had been saved through his brave efforts.

“Eternal Gratitude is not just a phrase,” Rabbi Yossy Goldman emotionally proclaimed. “Without this man’s heroic actions, we would not be here today!” It is a powerful message for humanity – one individual has the ability to truly change the world through an act of goodness and kindness.

He added that the Rebbe emphasized that every Jew – even a Jew born today – is a survivor, since Hitler – may his name be erased – was planning to wipe out the Jewish nation, G-d forbid, and so every Jew alive today has a responsibility not just to survive but to rebuild and strengthen the Jewish people.

Nobuki Sugihara movingly recounted that the real heroes in his father’s eyes were those brave individuals who departed Lithuania with nothing more than their abiding faith and the precious transit visas that Consul Sugihara was able to provide them with. It was the Sugihara survivors who created the living legacy which we are now able to witness.

As a result of his father’s actions, Nobuki Sugihara was given a scholarship to study at Hebrew University in Jerusalem. During the program, he surprised the audience by speaking Hebrew fluently. The moderator commented that listening to this Japanese man speak Hebrew put him to shame! To which Nobuki responded, “It’s never too late!”

The biggest surprise of the evening came when an 86-year-old woman in the audience came up to the stage and produced an original visa document with the stamp of Consul Sugihara on it. She herself was a Sugihara survivor who had brought her sons and granddaughter up to be part of this special occasion! Many descendants of the Sugihara Survivors, including members of the Goldman family, came from near and far to celebrate the legacy of this hero.

The evening was a tremendous Kiddush Hashem that left people inspired to increase in acts of goodness and to bring more light into the world, one Mitzvah at a time, thereby hastening the coming of Moshiach.