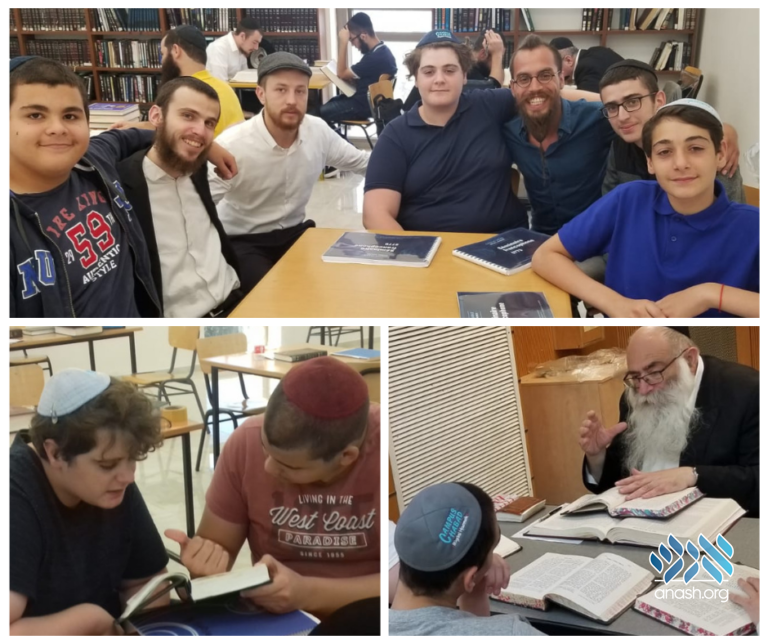 A group of students from all over Europe came for three weeks to the Tomchei Tmimim Yeshiva in Migdal HaEmek.

Many have heard about the incredible revolution made by the seminar of Jewish studies for Argentinean and Latin American students. So, continuing in the same direction, a group of students from all over Europe came for three weeks to the Tomchei Tmimim Yeshiva in Migdal HaEmek.

The program combined Jewish studies and outings all around Eretz Israel, through which the students acquired broad knowledge in Judaism and Chassidus, by studying one-to-one with yeshiva students, as well as with the Rabbis.

They appreciated learning about Chabad and the Rebbe, enjoyed farbrengen and discovering niggunim. Also by sleeping and eating in the yeshiva they really got the opportunity to experience the warmth of Tomchei Tmimim.

17 year old Dan from the Paris region, who until now studied in public school, admits “it’s the first time I’m in an environment with so many other Jews. In my town, there are hardly any Jews, so it comforts me to see other Jews put Tefillin and celebrate Shabbat. What most impressed me is that the yeshiva students enjoy studying so much, I’ve never seen such a thing in secular schools!” Even though he doesn’t speak Hebrew yet, he managed to interact with the other guys “everyone here is very nice and tries to say a little word in French. I really spent a great time and hope to keep in touch with them.” As a yeshiva student asks him if he will study in the yeshiva full time this coming year, he answers “I’d really like to”.

They truly received a lot during this short but intense time in the yeshiva, and they know it’s going to have an enormous effect on the rest of their lives. On their way back to their home countries, they expressed feeling proud of being Jewish, and are motivated to continue going forward in Torah and Mitzvos at home, and eventually come back to the yeshiva in the near future.