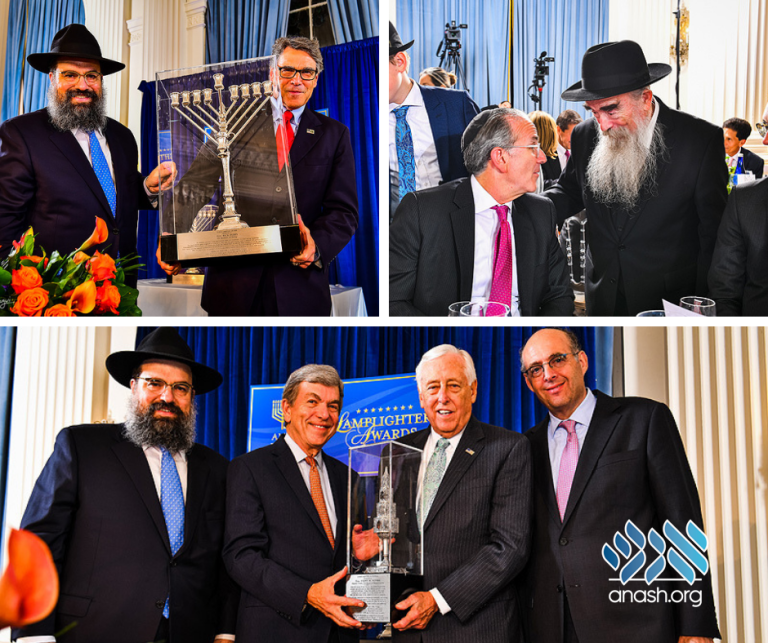 Hundreds of business, political and communal leaders filled the elegant Hall of the Americas on June 18th for the Lamplighter Awards Dinner of American Friends of Lubavitch (Chabad) in Washington, DC.

The dinner followed an impressive reception which drew some of the most prominent figures of the capital. It featured a display of Kosher cuisine not normally experienced by many in attendance, created by Table One. There was a diverse crowd of diplomats from Israel, El Salvador, China, Armenia, Argentina and Venezuela, among others.

Yousef Al-Otaiba, Ambassador of the United Arab Emirates to the United States, joined the festivities, the Secretary of Interior, and senior officials from the Departments of State, Treasury, Commerce, Education and Energy.

Mrs. Nechama Shemtov, senior shlucha of the Rebbe to Washington, DC, shared a thought on the Menorah and its connection to the challenges we are now facing following the shooting in Poway.

Mr. Louis Mayberg, president of Profund Advisors, Trustee of the Mayberg Foundation and, together with his wife, Manette, major supporters of American Friends of Lubavitch in Washington, DC, spoke about what drives his enthusiastic support of the organization.

Rabbi Avraham Shemtov, Chairman of the Executive Committee of Agudas Chassidei Chabad and National Director of American Friends of Lubavitch gave the evening’s invocation. International Advisory Board member and major philanthropist Mr. David Messer of Greenwich, CT, then kicked off the dinner with the recitation of hamotzi.

Ms. Arielle Stephenson, a student at GW who is co-President of Chabad GW, related her Jewish journey and how her interaction with Rabbi and Mrs. Shemtov helped her realize the crucial importance of a strong Jewish identity as part of her career and life development. She then introduced Hon. Makan Delrahim, Assistant Attorney General and himself a GW Law School Alumnus. He received the Lamplighter Special Friend Award.

Mr. Howard (Tzvi) Friedman, Chairman of the Board of the OU, President Emeritus of AIPAC and longtime Jewish communal leader, introduced Senator Roy Blunt (R-MO), chairman of the Republican Policy Committee and the Senate Rules Committee. Senator Blunt made the special presentation to the Lamplighter Awards Honoree, Hon. Steny H. Hoyer (D-MD), Majority Leader of the US House of Representatives.

Rabbi Levi Shemtov, Executive Vice President of American Friends of Lubavitch, related the Rebbe’s teaching about the Energy Grid, which comprises energy producers and consumers, who are paid and pay based on their production or consumption. They most often don’t even know each other. Our role is to be robust energy producers, helping to bring light and spiritually good energy to the world, though we often might not even know the actual beneficiary.

He then introduced Hon. Rick Perry, Secretary of Energy, who received the Lamplighter Public Service Award. Secretary Perry gave a passionate speech in support of Israel and the Jewish people, emphasizing the need for the Jewish people to stay strong and be strengthened by others. A video clip played was shown of a delegation of shluchim celebrating Chanukah with him during his time as Governor of Texas.

Hon. Paul Teller, assistant to the president, presented greetings from the president in which he praised all the honorees. “As the largest Jewish network of educational and social services worldwide, the Chabad-Lubavitch movement truly embodies the doctrine of service over self. In the United States, the American Friends of Lubavitch helps to raise awareness of issues facing the Jewish people, while also giving back to their communities and supporting national and international humanitarian relief efforts. Though your efforts, millions of Americans and individuals around the world know the resilient story of the Jewish people.”