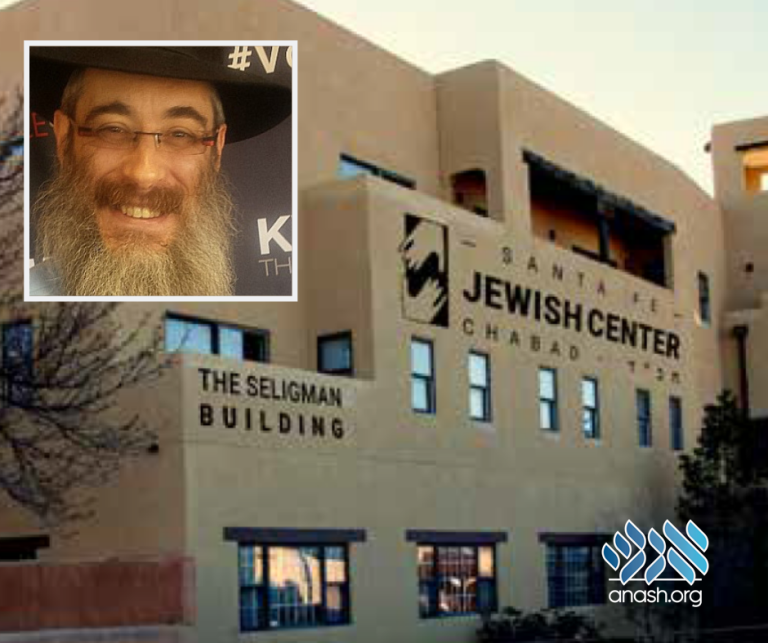 From the Gimmel Tammuz Issue of Derher

As he prepares to open a new Chabad House, New Mexico shliach Rabbi Berel Levertov shares an astonishing miracle of the Rebbe that brought him to this moment.

After several years of shlichus in Santa Fe, the time
had come to replace the current building of our Chabad House with a larger and more modern structure. We were happy with the location and a friendly couple pledged a substantial amount of money to sponsor half of the project.

We invested a lot of time, energy and money in creating the new blueprints but we encountered many complications. The price kept climbing and I was having my doubts if demolishing the old building and constructing a brand new building in its place was the proper route to take. The entire process was becoming very uncomfortable and I was plagued with a lot of indecision. We felt we were stuck.

On Shabbos Yud Shevat 5774 (2014), I was at the Ohel. Before traveling back home on Sunday I wrote a letter to the Rebbe begging for clarity in the building project. Standing in the Ohel I fervently davened that I make the proper decisions and that everything should work out for the best.

The next Shabbos was my daughter’s bas mitzvah and on Friday I wanted to give her something from the Rebbe as a gift.

Baruch Hashem I was zoche to grow up near the Rebbe and I had a substantial collection of coins, dollars and kuntreisim I had received from the Rebbe, as well as other objects I had managed to collect over the years. In addition, after my father, Rabbi Moshe Levertov’s passing eight years earlier I inherited a portion of his own collection.

As I opened the safe, a small piece of paper 2.5 X 3 inches that I had never noticed fell out. Apparently it was a part of my father’s collection and I have no idea what it was from. An original ksav yad kodesh from the Rebbe with four words:
במרץ והתפשטות לבלי חת
With energy and expansion without fear.

The Rebbe was clearly responding to my question. I should throw away my insecurities and move forward with the plans with a shturem!
Before moving forward I discussed the situation with three shluchim and they all advised me to go ahead with it despite the major financial responsibility it entailed.

We got to work immediately and with great enthusiasm we moved out of the building, rented a temporary space a 15 minute walk away and hosted a grand groundbreaking ceremony before Pesach. Many dignitaries participated, there was much positive media attention and the community was very excited about the new developments.

When we approached the bank to secure a construction loan, which I claimed was going to be paid off when the building was completed, they said that in order to consider it, I needed to provide a legally binding letter of commitment from the donors for their substantial pledge. When we contacted the couple to request the letter they responded that since we were moving ahead with the project with such speed and enthusiasm they will just give the money up front. No need for a letter.

Sure enough, a week later I walked into the abandoned Chabad House and found a FedEx envelope on the floor with a check of the full amount of their pledge! Time went on and just before Tishrei we met with the contractor to pick up the final plans and permits from the city. To our chagrin he told us that the final price was going to be an additional $500,000 and for the original price we would only be able to build 6,000 square feet. We were very upset. I told him that I was not moving ahead with either of the plans.

“So what are you going to do?” he asked.

My wife immediately started searching online and found a 16,000 square foot building for sale in downtown Santa Fe, a 25-minute walk from our house. Although we had originally never considered purchasing in that area because we were accustomed to having the Chabad House near our home, the past six months of walking 15 minutes to our temporary place had changed our attitude. Since we miraculously had the cash in the bank we were able to make a good offer on the building and the owner— who was a Holocaust survivor—decided to sell it to us with a good deal. This development was enormous! The entire community was amazed that we managed to secure such a large building at such a prime location in our small town. Two blocks away from the world famous Santa Fe Plaza and a stone’s throw away from the New Mexico State Capitol.

It was a tremendous kiddush Hashem and cause for great Jewish pride for the local Yidden to have a Chabad House at a landmark location in our beautiful historic town. Besides, the original location was in a residential area and the zoning laws were very tight. Aside for having a shul, we could not have a kosher deli, a museum, or anything of the sort on premises. But now we had a building in the perfect location for everything we wished to do. The building needed major renovations and the miracles did not stop there.

One Friday, I was on mivtzoim and struck up a conversation with a tourist visiting a store and gave him a challa. His name is Mr. Scott Seligman, who was originally from Santa Fe, currently living in San Francisco but visited quite often.

Turns out he was a successful businessman who the store owner had solicited for a donation to Chabad several years before. We had never met or spoken. He was impressed with Chabad and we developed a long distance relationship. One day I was speaking with Scott and he told me, “Rabbi, I will help you whenever you need.”

“I have a building down the block and I need you to name it,” I said.

Scott laughed good heartedly and left it at that. Some time later I decided to visit him in California to make the official pitch. After schmoozing for a while he asked how much I was asking for and when I said $900,000 he laughed in my face.

“Rabbi, I don’t give such amounts!”

I persisted and continued sharing with him all the wonderful things Chabad was accomplishing in Santa Fe, and after a lengthy conversation Scott decided he was going to name the new Chabad House for the amount I requested! I have spoken to Mr. Seligman many times and he still can’t figure out what motivated him to make such a sizable gift to one organization. But he’s very happy he did!

We are now in the midst of renovations and very soon will open the doors of the Santa Fe Jewish Center Chabad (Seligman Building).

Although our plans changed drastically from what we envisioned during Shevat 5774 (2014), the enthusiasm and excitement with which we moved forward caused the major donation to come in ahead of schedule, giving us the confidence and flexibility we needed, and changed our attitude to purchasing in a more central location. All because of the four worded message the Rebbe sent us on that Friday afternoon.

Join thousands of subscribers who receive the Derher in their mailbox each month, sign up here.