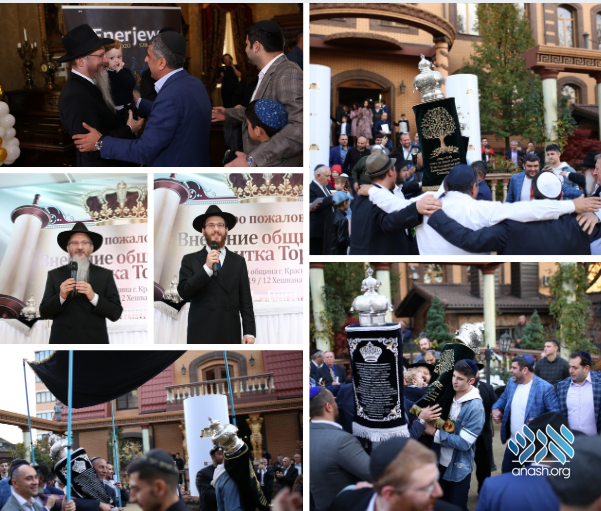 It was a festive and joyful day for the city of Krasnodar which lies in Western Russia. Under the leadership of dynamic Shliach Rabbi Menachem Mendel Lazar, the Jewish community decided to join together in writing a Sefer Torah that would unite all of the city’s Jews. Much effort and resources were put into this beautiful project, which was overseen by the dedicated Rosh Hakahal Reb Arye Leib Tkatch and Mr. Elman Michailov.

Additional guests who came from afar included Rabbi Shneur Zalman Segal of Baku, Azerbadjan, who was amongst the pioneers that began working with Krasnodar’s Jews. Rabbi Danzinger and Rabbi Stolin arrived from Rostov, Rabbi Halperin and Rabbi Leidiker arrived from Moscow, Rabbi Purchansky of Ohr Avner in Israel, and philanthropist Mr. Efraim Binyaminov of Moscow.

After the parade and customary hakafos, there was a lavish seudas mitzvah, for the many guests, community members, and government representatives. The feast and lavish event were generously sponsored by the Torpiashvilli and Davidov families, causing Krasnodar’s Jews to once again be very proud of their Judaism.

It was with great joy that news were received during the event from the Gavrielov and Saminduyev families of their decision to also sponsor an additional Torah scroll for the growing community of Krasodar.