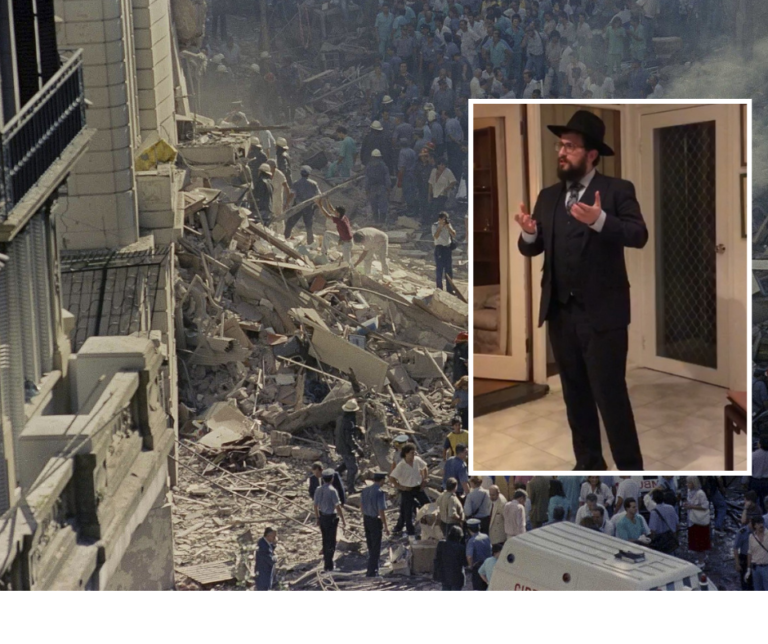 A commemoration was held at the Official Residence of the Ambassador of Argentina to Australia in Canberra to mark the 25th Anniversary of the terrorist attack against the Argentine Jewish Community Centre (AMIA).

The Foreign Ministry of Argentina in co-operation with the Latin American Jewish Congress, a branch of the World Jewish Congress, agreed to honour the 25th anniversary with commemorations to be held in some 20 Argentine embassies worldwide.

The Embassy of Argentina in Australia enlisted the assistance of Chabad ACT to organize the event and to provide Kosher catering.

“As you all know, the Jewish community in Argentina is one of the largest in the world. It is well integrated in our society and makes an outstanding contribution. Argentina’s art, culture and identity would not be the same without that contribution. We have learned from our Jewish brothers and sisters the value of life; we are part of God’s creation and were made in God’s image.”

Rabbi Shmueli Feldman, Chairman of Chabad ACT, was called upon to give the keynote address. Rabbi Feldman thanked his friend, Ambassador Gobbi, for agreeing to host the event and spoke about his time as a Shliach in Argentina and the warm spirit of togetherness the Jewish community appreciates amongst their fellow Argentines.

Rabbi Feldman expounded upon a Chassidic teaching regarding legitimate responses to tragedy: tears, silence and song. He recalled that following the two terrorist attacks against Jewish targets in Argentina, the people of Argentina cried loudly, and grieved with silence, standing shoulder to shoulder with their Jewish community. The singing, representing the continuity of the soul’s legacy in the world, had yet to be properly sung, as the planners of the heinous attacks have still not been prosecuted 25 years later.”

The Rabbi highlighted the importance of events of this nature to raise awareness to the growing antisemitism throughought the world and the need to combat it. “The Jewish community continues the song of those tragically taken from us by continuing to build Jewish communities and to live proudly as Jews” he said.

President of the ACTJC Inc, Mrs Veronica Leydman, who described herself as “a third-generation Argentine Jew”, told of how she had returned to the land of her birth accompanied by her husband and three children. “We saw the long horizontal board on a side wall of the [AMIA] building – a black background filled with the first names of 85 victims in white capital letters. In the middle of the list of names, is the date of the terrorist attack on the AMIA, underneath the words ‘memoria y justicia’ – memory and justice.”

She continued: “Although Hezbollah and Iran are widely believed to have been responsible for the AMIA bombing, there had almost certainly been a cover-up, and no-one had ever been held to account for the crime”.

The formalities concluded with Rabbi Feldman singing the traditional Kel molei rachamim memorial prayer and leading a minute of silence in tribute to the victims.