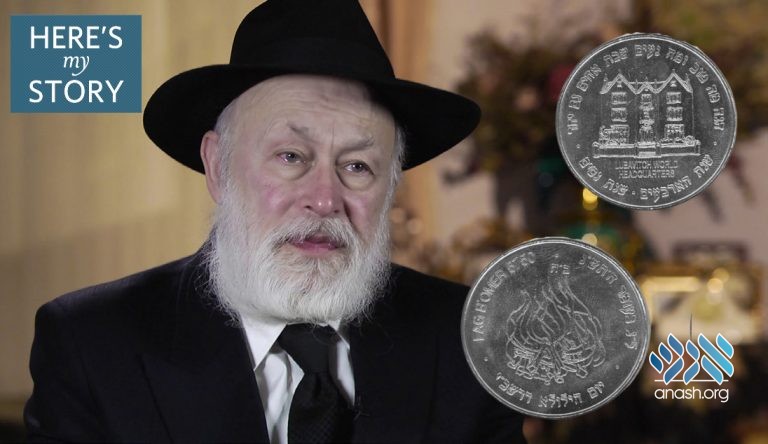 Rabbi Yehuda Krinsky, longtime secretary of the Rebbe, tells hows the Rebbe asked for special Lag B’omer coins to be printed in just a few days, and the note which made him spring into action.

For nearly four decades, Rabbi Yehuda Krinsky served as the Rebbe’s secretary. He continues to serve as the chairman of Merkos L’Inyonei Chinuch and Machne Israel, and secretary of Agudas Chasidei Chabad. He was interviewed by JEM five times between 2009 and 2018.

One fine autumn morning in 1952, while I was studying in the Chabad yeshivah at 770, one of the Rebbe’s secretaries came running into the study hall, asking me if I had a driver’s license. I said that I did. I had gotten it at age sixteen upon the advice of my family while home in Boston for the summer. “Oh good,” the secretary said. “The Rebbe wants to go to the Ohel [the resting place of the Previous Rebbe] as soon as possible and needs someone to drive him there. Can you take him?”

That is how I came to drive the Rebbe to the Ohel for the first time. Afterward, I was privileged to drive the Rebbe there many hundreds of times in the course of the forty years that I worked in his office. On many of these occasions, the Rebbe would speak with me about office matters or other timely issues.

Fast forward to Tuesday, May 8, 1990, just five days before the scheduled Lag B’Omer parade at Chabad-Lubavitch World Headquarters. On the road returning from the Ohel, the Rebbe asked me if it would be possible to mint a silver coin — like a silver dollar — that he would be able to give out during the parade.

That year large crowds were expected, because when Lag B’Omer came out on a Sunday many more children, especially public-school children from the entire tristate area, could attend.

To the Rebbe’s question, I responded that I had no knowledge of the process of minting a coin, but as soon as we got back I would make inquiries.

That day, after we finished the evening prayers and I drove the Rebbe home, I sat down with my son, Hillel Dovid, and my son-in-law, Yosef Baruch Friedman to make inquiries. It was already nighttime and most businesses in America were closed by then, so we tried contacting mints around the world. We soon learned that minting a coin is a complicated procedure and would take considerable time. Although it was not a simple project, we found two mints that were willing to try to mint the coin for us in a few days.

So on Wednesday, I wrote a note to the Rebbe: Regarding the silver coins for Lag B’Omer, after investigating the matter today, we found that although usually two months are needed for the process, there are two mints willing to manufacture the coins: one in Milan — owned by a supporter of Chabad — who is ready to try to mint them in about two days and send them on a flight on Sunday, and the second one is near New York, but is uncertain whether he can make them before Lag B’Omer.

To this note, I attached a sketch of what the coin might look like — it would have a picture of Lubavitch World Headquarters at 770 Eastern Parkway on one side, and a picture of a Lag B’Omer bonfire on the other.

The Rebbe responded that having the coins minted in Milan would not work as they would arrive only after the start of the parade. The Rebbe thanked me for the effort and added: “It is my fault that I didn’t bring this up at the proper time.”

When we saw the unsettling words, “It’s my fault,” we knew we couldn’t leave it at that. We had to find some way to have the coins for Lag B’Omer.

By now it was Wednesday afternoon, so the three of us sat down and thought and prayed, and we made many more phone calls. We immersed ourselves in the intricacies of minting a coin, learning what was needed — from preparing the artwork to creating a plaster mold to casting a metal die, which would then be used to stamp blank coins with the desired image.

Soon, with help of our longtime printer, Shaya Gansbourg, we located a place in Lower Manhattan where they made the molds, and another place that made the dies, and also discovered a fellow in Connecticut who could stamp the coins once the die was ready.

We rushed our in-house designer, Avrohom Weg, to have the artwork prepared for both sides of the coin, and the very next day, Thursday, we sent it on to the mold-making place in the morning, and once we had the mold, to the die-making place in the afternoon.

And, on Friday morning, we got word from the stamper in Connecticut that: “We will have eleven thousand coins delivered to you Sunday morning, finished.”

I told him, “Make sure that the work is not done on Shabbat.” He agreed.

On Friday, I notified the Rebbe that the coins will be ready and delivered hours before the parade. He responded with obvious satisfaction and added a very special blessing: “May you have peace of mind in your own affairs, as you have provided me [with peace of mind] regarding this.”

It was an extraordinary blessing. You find this language in the Talmud, but this was a very unusual thing for the Rebbe to say.

The event was a huge success. Thousands of children participated in the parade. Besides the children and adults from the tri-state area, there were many others who came from as far away as Florida and California, and a large group had even traveled from Israel. After the parade was finished and all the children marched by the Rebbe, the teachers and supervisors were summoned by the Master of Ceremonies, Rabbi J.J. Hecht, to the Rebbe’s platform where the Rebbe handed each of them a pack of these special coins to distribute to the children.

And then the Rebbe led everyone in singing the words of Psalm 133 that were engraved on the coins: “How good and how pleasant it is when brothers dwell together.”