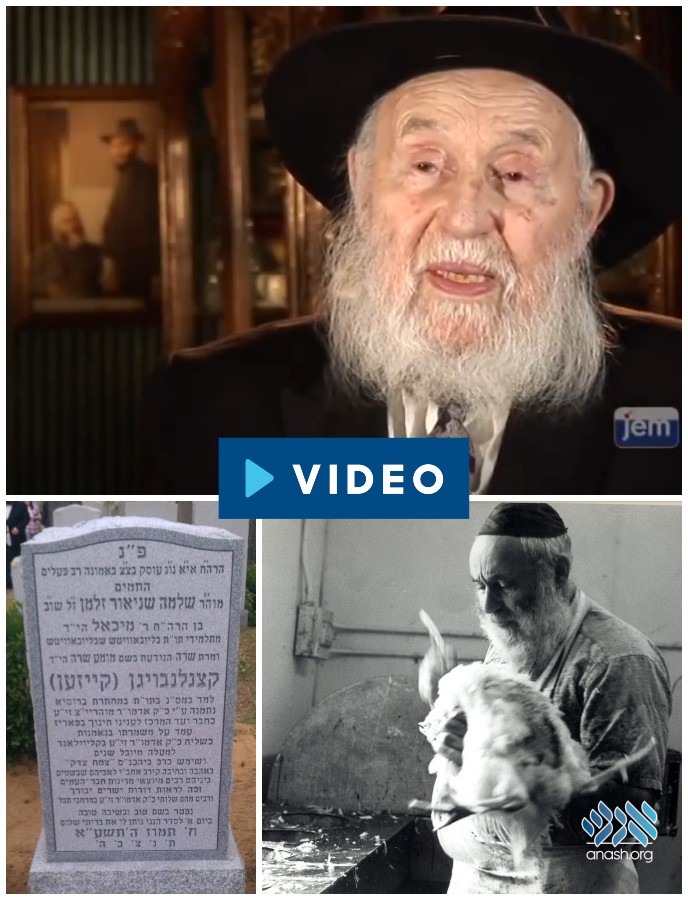 Today marks the 10th yahrtzeit of shliach Reb Zalman Kazen, who dedicated his life to fellow Yidden in Soviet Russia, Paris, and for 50 years in Cleveland, OH. He was 93 years old when he passed away in 5771/2011.

Born in 5678/1917, Shlomo Schneur Zalman Katznellenbogen was raised during the repressive Soviet era when teaching Yiddishkeit was a severely punished crime. When he was 18, his father Reb Michoel was taken away one night, never to be heard from again.

In 5700/1940 he married Shula Shagalov, the daughter of Maryasha. Soon after, the war came to Russia and the young couple fled eastward with thousands of others. Three daughters were born to them over the next few years: Esther a”h (Alpern), Dvonia (Alevsky), and Henya (Laine).

After World War 2, Reb Zalman helped his mother, Mumme Sarah, smuggle hundreds of Chassidim across the border using fake Polish passports. He and his family managed to get onto the last train leaving Lemberg (Lvov) to Poland.

Mumme Sarah had previously given her own passport to Rebbetzin Chana, the Rebbe’s mother. She was eventually arrested by the authorities and passed away on 9 Nissan, 5712/1952.

Before long, they arrived in Paris and Reb Zalman’s “career” in askanus and shlichus began. He was one of the founders of Beis Rivkah in France; his wife, Rebbetzin Shula Kazen, was always at his side. In Paris, Rebbetzin Kazen gave birth to another three daughters: Bluma (Wineberg), Rivka (Kotlarsky), and Rochel (Goldman). After living there several years, the Kazens were finally able to emigrate to New York.

In 5713/1953, Reb Zalman arrived with his family in the United States and was sent by immigration officials to Cleveland. There, he was offered a job by the Zemach Zedek shul, which the Rebbe advised him to take.

The Rebbe told him that Cleveland is a good place to raise children. Soon after arriving there, their son, Yosef Yitzchok, a”h, was born. Later, when they became US citizens, he changed their last name to Kazen.

Over the next 50 years, Reb Zalman was mekarev generations of families for whom he cared body and soul. When it came to helping people, there was nothing that was beneath Reb Zalman. He served as rav, shochet, and chazan; he prepared boys for their Bar Mitzvahs and adults for the chuppah.

He worked tirelessly to encourage parents to send their kids to local Jewish schools and was quite successful in this endeavor. Everyone in the city knew him, because nothing happened in Jewish Cleveland without his involvement.

In the 1970s, Russian immigrants began to arrive. The Kazens were there to help them get settled and eventually, to reclaim their lost heritage. They arranged thousands of brissen during that time.

Reb Zalman never forgot his brethren in the Soviet Union. He regularly sent them food, clothing and religious articles, including copies of the Rebbe’s sichos and maamarim.

“Rabbi Kazen will always be remembered as an incredible individual who was deeply committed to the broadest spectrum of Judaism,” Rabbi Simcha Dessler, principal of Cleveland Hebrew Academy said at the time of his passing. “His contributions are evident in his shul, in Chabad in Cleveland, and in the thousands of Soviet immigrants who experienced Judaism because of him and his wife.”

In 5768/2008, at nearly 90 years of age, Reb Zalman and Rebbetzin Shula moved to New York to be near their children. Although they had moved from Cleveland to Crown Heights, they remained true shluchim in every sense of the word until their last days.

Read more about Reb Zalman and his activities here.