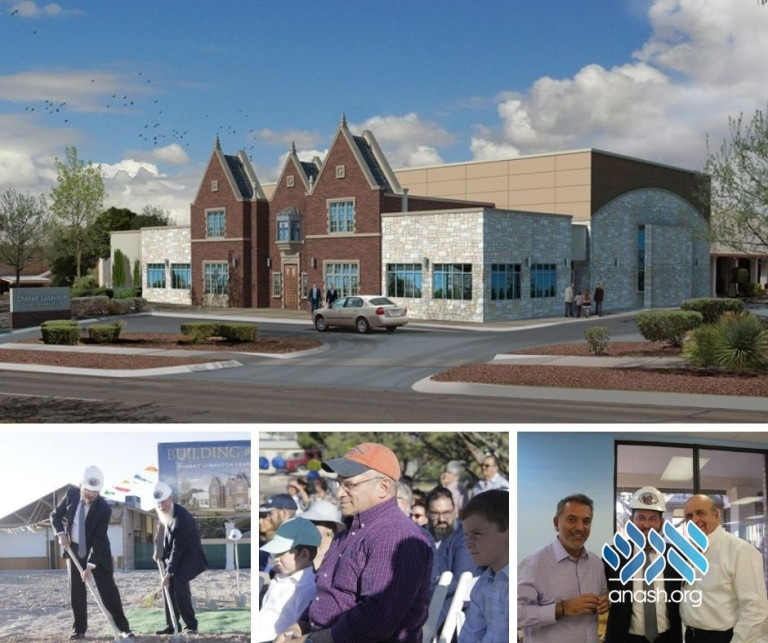 Chabad of El Paso laid the foundations for its new Jewish Life Center, which will be built as a replica of 770.

In 1986, Rabbi Yisroel and Chana Greenberg arrived on shlichus to El Paso, Texas. In the 33 years since, they have established a thriving community, with programs serving every demographic from infants to the elderly.

Six years ago, Chabad of El Paso began a campaign to raise funds for a new building to house their growing community and many activities. Last week, a large crowd gathered to celebrate the groundbreaking for their new home.

Amid a festive atmosphere, the plans for the new building were revealed. Combined with an existing building, the campus will now boast a shul, social hall, library, preschool classrooms, a hospitality suite, and meat and dairy kitchens, among other things.

“The front door of a Chabad Center is the most important place in the building,” said Rabbi Levi Greenberg, who serves as a shliach alongside his parents. “It is the entrance through which everyone is welcomed and becomes a part of the community.”

In light of this, the entrance of the building will be built as a replica of 770. As Rabbi Yisroel Greenberg explained, “The facade of that iconic building in Brooklyn is symbolic of everything Chabad stands for.”