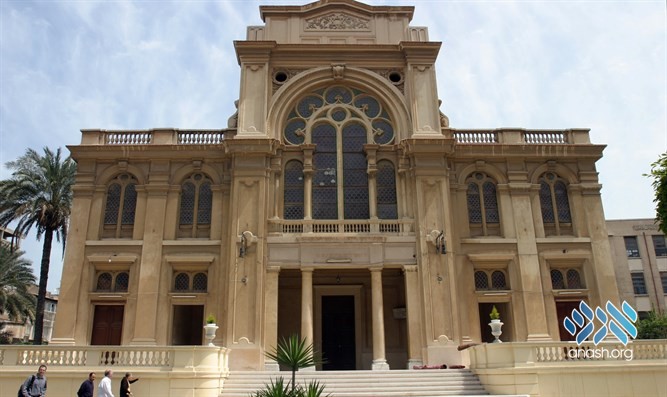 The Eliyahu Hanavi synagogue, boasting green and violet stained glass windows and towering marble columns, was built in its current form in 1850 by an Italian architect on top of the original edifice dating back to 1354.

The synagogue was bombed during Napoleon Bonaparte’s invasion of Egypt in 1798.

In cooperation with the military, Egypt’s antiquities ministry oversaw the 64-billion-pound ($4-million) renovation which lasted over three years after the roof and staircase collapsed in 2016.

Sitting in the back wooden rows, Yolande Mizrahi, a septuagenarian Jew born and raised in Alexandria, was delighted with the conservation.

“If it wasn’t for (President Abdel Fattah) al-Sisi, this would have never been done. A lot of things have changed since he’s taken over,” she told AFP.

In 2018, Sisi singled out preservation of places of worship for Egyptian Jews and Coptic Christians as a priority for his government.

The Mediterranean city of Alexandria was once home to around 40,000 Jews, but Egypt is now home to only a handful of Jewish citizens.

The Arab country’s Jewish community fled or were expelled during the 1950s and after the 1948 creation of Israel.

For Mizrahi, she fondly recounted how the synagogue which she used to attend as a youngster was a communal gathering space for the Jewish minority in Alexandria.

She hoped Friday’s opening of the temple to the public would spur other Jews abroad to visit the temple. “I have relatives who left to France, Italy and Israel and they would like to visit the synagogue now,” she added.

The synagogue was closed in 2012 for security reasons following the 2011 revolution that unseated long-time autocrat Hosni Mubarak.

Egypt has since sought to promote its cultural heritage to revive the vital tourism sector, badly hit by political insecurity and attacks.

Magda Haroun, one of the leaders of the dwindling Egyptian Jewish community in Cairo, choked back tears after the ceremony. “This is recognition of Egypt’s Jews who were neglected for over sixty years,” she told AFP.

“It is recognition that we have always been here and that we have contributed to a lot of things just like any other Egyptian” Haroun said.