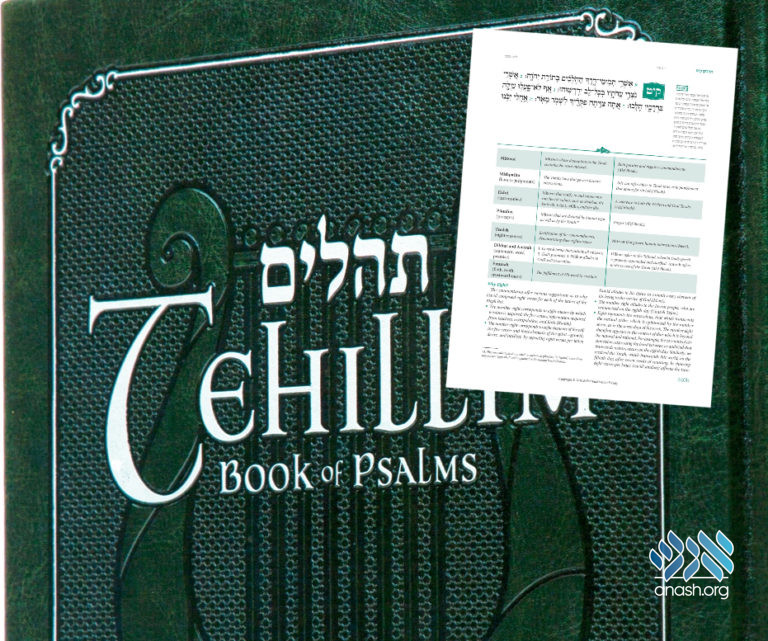 Kehot Publication Society has released a PDF containing 38 pages of commentary on kapital 119, from the new Hebrew / English Tehillim with commentary by Rabbi Yossi Marcus.

In honor of 11 Nissan 5780, the 118th anniversary of the Rebbe’s birth, Kehot Publication Society has released a PDF containing 38 pages of commentary on kapital 119, which Chabad chassidim begin saying yesterday.

According to Ibn Yachya, kapital 119 is the loftiest of all the psalms, containing wondrous secrets of the Divine names. According to the commentary in Siddur HaShaloh, it should be recited daily.

One who recites it regularly, says Ibn Yachya, will find his heart opened to more easily acquire wisdom and to be diligent in serving Hashem. According to Sforno, when Dovid Hamelech foresaw the exile of his people, the ingathering of the exiles, the war of Gog, the birth pangs of Moshiach’s arrival and subsequent redemption, he arose and prayed for God’s deliverance with this psalm.

It is customary to recite the chapter of Tehillim that corresponds to one’s age (i.e., from one’s thirteenth birthday and on, one should recite psalm 14). It is also customary to study on one’s Jewish birthday the psalm that one is beginning to say. Chassidim have the custom to do the same for the Rebbe’s birthday.

The PDF is an excerpt from Kehot’s edition of Tehillim, with commentary compiled by Rabbi Yosef Marcus, Shliach to S. Mateo, California. The full edition can be purchased at Kehot.