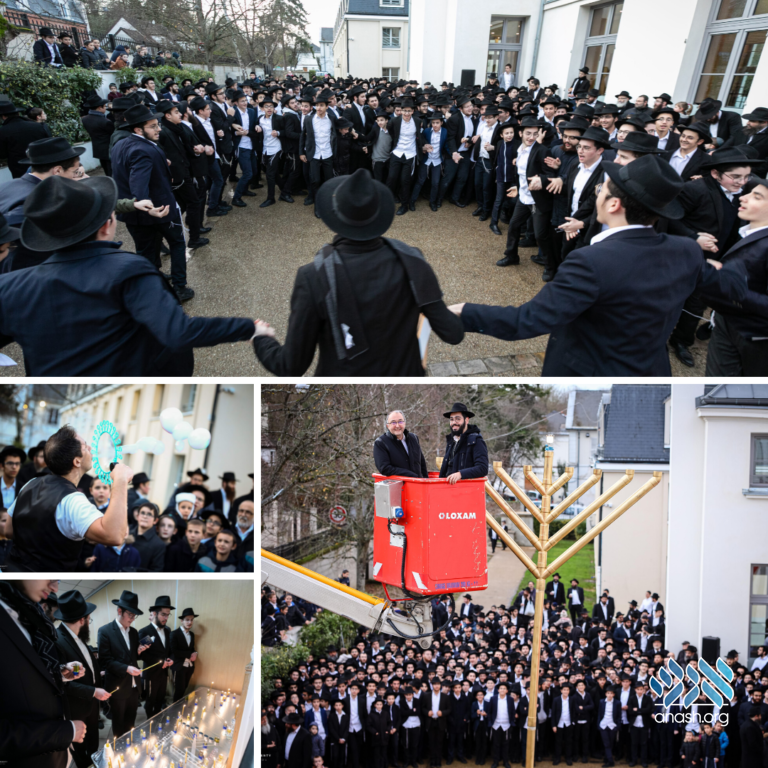 On the first candle of Chanukah, a grand Menorah lighting was held in the yard of the Brunoy Yeshiva. The lighting was arranged by the yeshiva and the community and was attended by the Mayor of Brunoy and friends of the yeshiva.

The lighting also celebrated another milestone. The yeshiva was marking four years since the inauguration of the Beit Baruch building.

The Beit Baruch building was donated by philanthropist Tzvi Hirsch Bogolyubov. It was about ten years ago, when Rabbi Mendel Gurevich and Mr. Alan Green invited Mr. Boglovov for a visit. R’ Tzvi Hirsch who accepted the invitation, and was accompanied by his friend, Rabbi Shmuel Kaminetzski, head shliach to Dnipropetrovsk.

Mr. Bogolyubov was very excited about the visit to the yeshiva with such a rich history. In a moment of inspiration, he decided to make a substantial contribution to enable a thorough renovation of the ancient and original building of the yeshiva. As a token of honor and appreciation to Mr. Bogolyubov, the yeshiva decided to name the building “Beit Baruch” after Mr. Bogolyubov’s father.

After much investment, the building was thoroughly renovated, preserving the ancient character of the original building which was actually a palace of the kings of France. The inauguration of the building was inaugurated four years ago, on R. Baruch Bogolyubov’s yortzeit, and for technical reasons related to the permits, the sign hanging and the name of the building were rejected. Finally, this year, Baruch Hashem, four years after learning started in the magnificent building, the naming ceremony was held with great pomp.