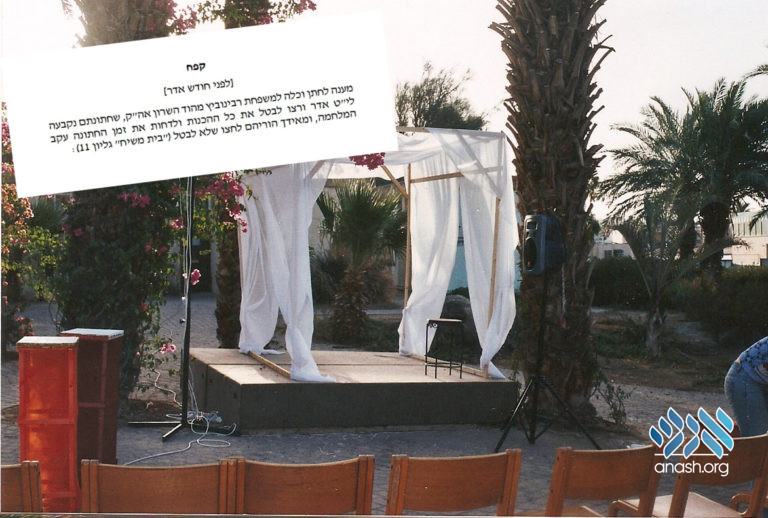 Even in these unprecedented confusing times, the Rebbe finds ways to answer and give brochos to chassidim. Read a fascinating first-hand story by Rabbi Eliyahu Shvicha, a shliach in North Tel-Aviv.

Rabbi Eliyahu Shvicha, a shliach of the Rebbe North Tel-Aviv shared the following story that happened with him:

The wedding of my brother-in-law Daniel Naki was scheduled for Sunday, the 19th of Adar. Just a few days earlier, Israel’s Health Ministry announced that weddings may only have up to one hundred participants. The family worked straight away on preparing that the wedding that it should be according to the new regulations.

Late Thursday night I wrote a letter to the Rebbe and sent it to the Ohel asking for a Bracha that the wedding should be a joyous one and everything should work out properly. The following morning, I opened the recently published booklet “Likut Maynos” containing answers of the Rebbe of the year 5751 in order to share interesting answers by a weekly farbrengen that is held amongst shluchim in Eretz Hakodesh.

Suddenly I noticed a most amazing answer relating to what I had written to the Rebbe about the night earlier. The Rebbe was writing regarding a wedding that was supposed to take place on 19 Adar (!) which the choson and kalla wanted to push off because of the uncertain safety situation at that time, the Gulf War.

From the entire booklet containing four hundred answers from that year this is was the only answer printed regarding a Chasunah and it was specifically about a weddding on 19 Adar!

Straight away I told my father–in-law about it and he told it to his mechuten who said that this is mamash a moifes. He recently had a storage room put in but he hadn’t yet had the chance to put up a Mezuzah on the door!

On Motzei Shabbos it was announced that weddings can no longer be held in halls at all, and in Kfar Chabad they announced that their halls will be closed. Many people were very distressed from this news. However, after having receiving such a clear answer from the Rebbe our family did not get disheartened, having bitachon that the wedding would be a joyous one and would take place at the original date (the very next day!). Obviously while being sure to be in accordance with the regulations of the Health Ministry.

The very next day, at the time and on the date originally determined, the wedding took place without a hitch and much joy while being according to the new restrictions and regulations.

The location of the Chasunah did indeed change from Kfar Chabad to the seashore in Hertzliyah but in the answer the Rebbe did not mention anything about not changing the location.

The next answer of the Rebbe printed in the Likut Maynos booklet after the above-mentioned answer regarding the Chasunah, was an instruction to make sure to follow the Psak Din of the Mora D’asra of Kfar Chabad. This prompted Rabbi Meir Ashkenazi who was supposed to be mesader kiddushin by the wedding in Kfar Chabad to come especially to Hertzliyah to marry off the couple.

The next day I sent the story and the Rebbe’s answer to Rabbi Zalman Garelik, shliach of the Rebbe to Be’er Sheva, who is in charge of the weekly shluchim farbrengen, whose child was also scheduled to get married that week.

Several minutes later he answered me that upon receiving my messages he had run to his storage room to check what the situation was with his Mezuzah there and to his shock, he discovered that the Mezuzah had fallen down!

Boruch Hashem the Garelik’s also held the wedding at the predetermined date and time in accordance with the health regulations but admist much joy.