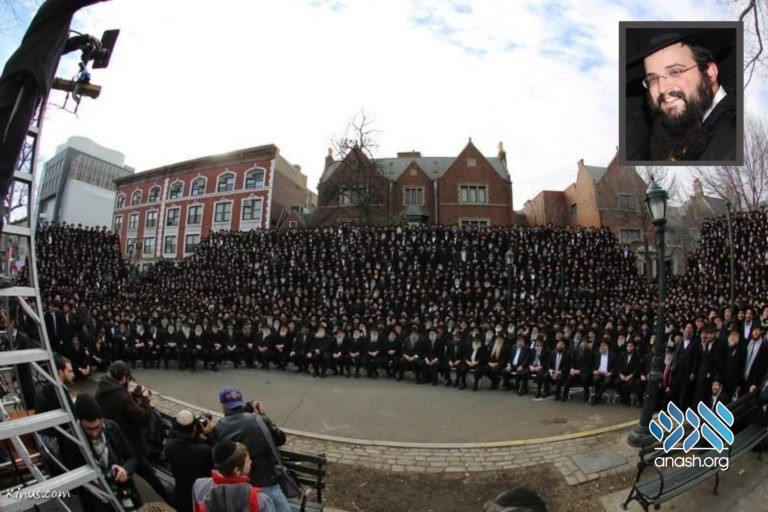 In a social media post that has gone viral, Rabbi Eli Friedman of Calabasas, CA shares the truth behind the familiar Shluchim Photo.

If there is ever a contest for “World’s Most Misunderstood Photo” the annual class photo of the Shluchim (Chabad rabbis) will surely be a finalist.

You know the one I’m talking about? About six thousand Shluchim (G-d bless them) convene in New York every year for an annual conference and Shabbaton and on Sunday morning they pose in front of 770 (Chabad World Headquarters) for a massive group photo. (This year’s conference is this weekend.)

When you look at the photo, you could be forgiven for thinking that someone had taken a picture of a Shliach (Chabad rabbi) wearing a black fedora and black suit and then hit copy and paste 6,000 times. Aside from the beard colors (black, white, gray and red) very little differentiates one rabbi from the next and on the surface it seems like a conformist convention.

And that is exactly what it isn’t. It would be an injustice to the Shluchim to believe that they are all the same with identical stories, attitudes or personalities. The beauty in the deluge of black and white is the colorful diversity hidden everywhere in the picture.

You look at one face, you’re looking at a prominent community leader, rabbi and spiritual leader to 2,000 people in a large American suburb. Grinning right next to him is the Shliach in a South American village, a man whose only struggle greater than making a living is the struggle to assemble a Minyan so a local can say Kaddish.

Pan over to the next Shliach and find the chief rabbi of a massive European country. He rubs shoulders with billionaires. And next to him – the Shliach to Nowhere, USA. He can’t rub together two pennies.

In this one picture you have newlyweds, middle-aged parents, fresh grandparents, and patriarchs of massive families with legions of grandchildren and great-grandchildren, often in the hundreds, kinehora.

The guy with the red beard over there spends most of his time behind bars tending to the desperate needs of local Jewish prisoners. The short, salt-and-pepper beard behind him started off as a local youth director at the age of 23 and is still at it, devoted to his third generation of kids 30 years later. (And that short beard is rolled up; it’s two feet long. I’ve seen it!)

Scroll down to that guy there with the black beard. Ten years ago, this guy didn’t know what a Mezuzah was. He was the starting quarterback on his high school varsity team and his chances of ending up a Shliach were as good as his chances of ending up starting for the Cowboys. But here he is, flush with excitement, living the dream (the Shliach one, not the Cowboys one.) The very tall one next to him was a successful business attorney who yearned to do more, so he traded in his law practice for a campus Chabad post. He admits that his 401(k) is poorer but that his life is much richer.

And just above him, with the silky white beard, is the rabbi’s rabbi, an expert in Jewish law, a genius of enormous proportions, a man with miles of Torah on the tip of his tongue and a heart of gold in his chest. Just one of the guys.

This guy here grew up in a mansion in Missouri and he’s a beloved spiritual mentor to Yeshiva students. The guy talking to him grew up in a matchbox in Michigan and he’s growing a community in Colorado.

This Italian here runs Chabad in Utah; this other Italian runs Sweden. That Russian runs Texas. This Israeli runs Alabama. That Brazilian runs New Jersey. This Australian runs Georgia. And of course, these boys from Brooklyn are running Nevada, Montana, Louisiana, and Nebraska. And Germany. And Ghana.

This shy scholar here? He is in the midst of a $20 million building campaign. The charismatic gentlemen listening to him is in the midst of a $300,000 foreclosure. The thin man next to him just opened a Glatt Kosher restaurant in Mexico, just like the guy behind him who just opened a Kosher eatery in China. But the rabbi behind them, serving the Russian hinterlands, hasn’t seen a Kosher restaurant since last year’s conference and has been slaughtering and koshering his own meat for fifteen years.

The rabbi in the corner is part of a family that has been Chabad since Chabad began 230 years ago. His classmate and colleague embracing him is the child of two ex-hippies who searched their way to Chabad in the 60’s and reversed four generations of assimilation.

Most of these men speak Yiddish, Hebrew and some English. But if you listen closely you can hear the conversations accented by countless languages and dialects. Most of these men are of Ashkenazic background, but many are Sefardic, some are Yemenite, some are Persian. Many are fourth or fifth generation Americans.

The differences never end. Each and every person in this photo is genuinely unique and each of them has a one-of-a-kind story that will yet be told.

Drenched in that family vibe, all the colorful languages, backgrounds, upbringings, personalities and living conditions blend together brilliantly. They produce a spiritual harmony the likes of which has never been seen before.