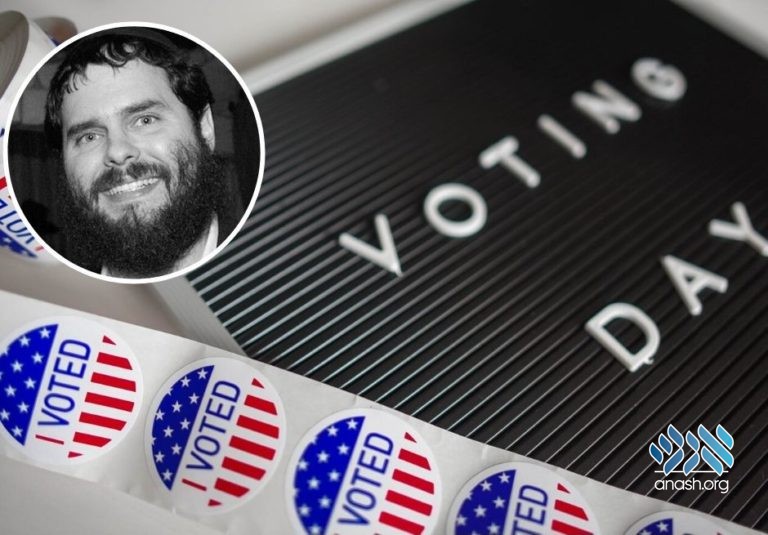 The news these days is full of talk about elections. Indiana Shliach Rabbi Eliezer Zalmanov shares insights on one particular vote and lessons we can draw.

There is a lot of talk about elections these days. Israel just had its third election in less than a year, and the US is in the midst of a heated presidential election set to consume the news at least through November.

What most typical elections have in common is that although they are generally promoted as being the voice of the people and that every vote counts, the truth is—as we all know—not every vote actually counts. Of course, a large enough bloc of voters certainly counts, but as individuals, it is difficult to see how a single vote can practically make a difference in the outcome of an election.

But all this talk about elections and voting reminds me of another type of election, one where electing something actually made a difference in the lives of those that chose it.

It was on the holiday of Purim in 1955. The Lubavitcher Rebbe was holding a special farbrengen to commemorate the day. The Rebbe held farbrengens for every holiday and also very often on Shabbat. But the Purim farbrengens were always unique. In addition to the atmosphere being much more joyous than usual, the Rebbe also spoke differently then, addressing heavenly topics in an oh-so down to earth manner, and using a no-holds-barred type of language.

At that year’s Purim farbrengen, the Rebbe was talking about the various challenges people can face when it comes to living a Torah-true lifestyle, and one of the things he mentioned is the challenge of wealth. For generations, being rich was considered a tremendous obstacle to living a traditional Jewish life. Jews were always much happier just making ends meet and nobody wanted to be wealthy. In fact, it was always believed that the more well-off a person became, the less religious they were inclined to become as well. Once in a while a religious Jew struck it rich, and stayed religious, but that was an extreme anomaly.

As was often his style, especially at Purim farbrengens, the Rebbe countered this conventional wisdom and stated: “There are many challenges that Jews face today, yet somehow we manage to overcome them and stay true to our traditions. So what’s wrong if the challenge happens to be that of wealth? Let Jews be comfortable and do well financially, and manage to overcome this challenge as well!”

Then he said (and this is where the “election” comes in):

“Since in American everything has to be done with a vote, anyone that agrees to become extremely wealthy and is prepared to exert the effort to overcome this challenge should raise his right hand!”

In the recording of this farbrengen, one can hear the crowd gasping. Imagine: Many of the attendees were recent immigrants to the US following WWII. For them, being wealthy was the furthest thing they ever dreamed of—both practically because the means to becoming rich were simply not available to them, and also spiritually because nobody wanted to have to deal with the challenges. Yet, suddenly the Rebbe is telling them that they should want to become rich and deal with the challenge and overcome it! Who ever heard of such a thing?!

And so, almost nobody in the crowd raised their hands.

After a few moments, clearly frustrated at the tepid response, the Rebbe said: “You were given an opportunity for a blessing that has never presented itself before. Why are you afraid of wealth and its challenges? Why did only less than ten people raise their hands?”

I’m not old enough to have been present at that farbrengen, so I don’t know who actually raised their hands, but the story goes that those that did ended up becoming extremely wealthy. They elected to work hard and to overcome the challenges associated with wealth; they were prepared to do whatever it takes to commit to continue living traditional Jewish lives even in the United States, which at the time was only starting to accommodate traditional Judaism on a large scale in the workforce, and the Rebbe promised that they would succeed.

That’s a choice we can all make, even today. A successful person is always expected to have made sacrifices in order to reach where they are at this point. Nobody gets anywhere in life or in their careers easily without obstacles along the way. Overcoming challenges are what make the eventual successes all the more valued.

So let’s not be afraid of what the world has to offer us. Let’s not shy away from a challenge and get comfortable with the status quo—especially when we are guaranteed the tremendous benefits that await us on the other side.

You can elect to make a difference in your life and to do better today than yesterday, and better tomorrow than today. That is the one vote you know will certainly continue paying dividends and have a lasting impact.

This column originally appeared in the Times of Israel.