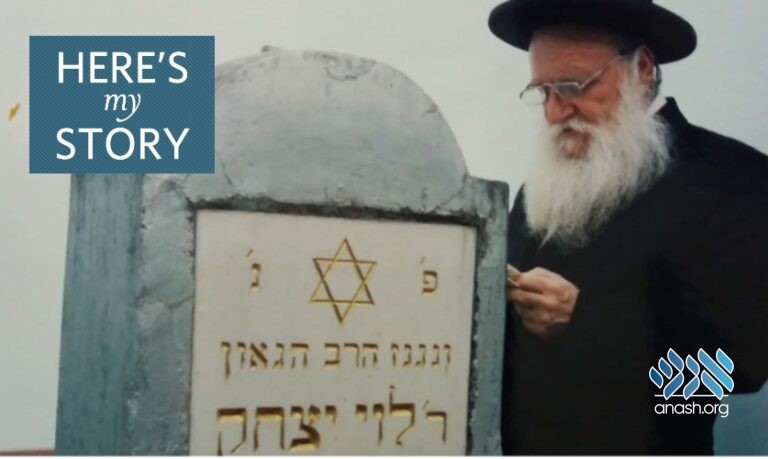 As a young Yeshiva student, Rabbi Naftali Tzvi Gottlieb was troubled that very little was known about the life of the Rebbe’s father. With the Rebbe’s encouragement, he set out to write a book about him.

Rabbi Naftali Tzvi Gottlieb (1935-2017) was a prolific writer and author. His biography of the Rebbe’s father, which was originally published in Hebrew, has since been partly translated into English under the title: Rabbi, Mystic, Leader: The Life and Times of Rabbi Levi Yitzchak Schneerson. He was interviewed in his home in Betar Illit, Israel, in January of 2014.

As a young man, while studying at Chabad’s Yeshivas Toras Emes in Jerusalem, I became curious about the Rebbe’s background. Of course, I knew that the Rebbe shared his surname with the Previous Rebbe – who was his father-in-law – and that he was the descendant of the famed Tzemach Tzedek, but I knew nothing beyond that.

My fellow students also knew nothing more, and when I asked the elders in the yeshivah, I received no further details. The lack of information troubled me very much – it just didn’t feel right. “He is our Rebbe,” I thought, “so why don’t we know more about his roots?”

This matter continued to trouble me into adulthood, and I decided to do something about it. So I sent a letter to the Rebbe, telling him that I would like to write a book about his father – Rabbi Levi Yitzchak Schneerson – but I never received a response.

In 1974, during the month of the High Holidays and Sukkot, I traveled for the first time to New York to see the Rebbe. After the conclusion of Simchat Torah, when everyone approached him to receive wine from his cup – a ceremony known as Kos Shel Brachah – I went up as well. As the Rebbe poured the wine for me, he said, “You promised me a book about my father. Where is it?”

I was momentarily shocked that he should remember something from so long ago, but then I responded, “I sent the Rebbe a letter, but never received a reply.”

The Rebbe smiled and said in a voice loud enough for the people standing nearby to hear: “I don’t need to answer you. G-d needs to answer you.”

He continued: “Now that you are here, collect material for the book. There are many people in New York who knew my father. Try to publish it quickly.”

Within moments, people who had heard what the Rebbe said came over to me to say that Rebbetzin Chana, the Rebbe’s mother, had kept a diary in which she wrote at length about what she and her husband had experienced during the harsh years of persecution in the Soviet Union.

They sent me to the right sources, and I was able to obtain copies of some of the Rebbetzin’s hand-written notes in which she vividly described her husband’s arrest in Yekaterinoslav – where he had served as the town rabbi for thirty years – for allegedly conducting counter-revolutionary activities – i.e., teaching Torah. She also related how, after a year of imprisonment and torture, Rabbi Levi Yitzchak was exiled to the remote village of Chi’ile in Kazakhstan, where he continued to record his novel Torah insights.

This was stunning information, and there was more. The Rebbe gave me the names of several chassidim from Russia who knew his father, and although a few of them were too old to be interviewed, I got some great leads. I found that in the Geulah neighborhood of Jerusalem lived the poet Zelda Schneerson-Mishkovsky, whose father, Rabbi Shalom Shlomo, was Rabbi Levi Yitzchak’s brother. She’d had a long correspondence with Rebbetzin Chana, letters which contained additional details that weren’t mentioned in the notes I had received previously.

Although I started with nothing, once I began to work, more and more material surfaced every day. I felt an urgency to complete the task, and pursued anyone who had information, and after word about what I was doing got out, people began to call me to share things they had heard.

Little by little, a picture emerged of a man who bravely defied the Communists; a man who stood in the breach at the risk of his life to keep Judaism alive while in Yekaterinoslav and then, when in exile, labored under the most grueling living conditions, beset with hunger, sickness and little hope of release; a man who lived each moment by the dictates of his soul and his faith in G-d.

Every time I finished writing a chapter, I immediately sent a copy to the Rebbe. This was about his father after all, so he needed to be the first one to see it. He made some comments and some deletions.

For example, Rabbi Simcha Gorodetzky shared an interesting story with me. He had visited Rabbi Levi Yitzchak in Yekaterinoslav and stayed there for two weeks. One day, Rabbi Levi Yitzchak pointed to an adjoining room and said to Rabbi Simcha, “You see that youngster sitting and learning over there? He is my oldest son, Menachem Mendel. He is fluent in both the Babylonian Talmud and the Jerusalem Talmud, as well as the Midrash and every other part of the Jewish Oral Tradition, not to mention the Kabbalistic teachings …”

I included this story in one of the chapters and – as I did with every other chapter – I immediately sent it to the Rebbe. A day later I got a call from Rabbi Mordechai Hodakov, the Rebbe’s secretary, who said that the Rebbe wanted me to take out certain pages from the last chapter. “It’s imperative that these parts be removed,” he wrote.

When I got the list of pages he found objectionable, I realized that he had deleted all the stories that spoke of him as a young genius. The Rebbe was so humble! Of course, I followed his instructions and, as a result, that chapter became quite short. But I reported back to the Rebbe that I did as he asked, and he was pleased.

About eighteen months had passed since I began working on the book and I still continued to accumulate new material. Naturally, the editing also took a long time, and the publication of the book was postponed several times. In the Hebrew month of Adar 1976, I received a sternly-worded letter from the Rebbe, in which he wrote, “It is a big shame that the book about my father is being delayed for so long … and till when? It seems that it won’t even be published for the 11th of Nissan.” (He meant, not even by his birthday.) From this I understood how urgent this project was for the Rebbe.

I began to work even more diligently and I made a lot of progress. Finally, right after Passover of the following year, 1977, the Hebrew version of the book was published, entitled Toldot Levi Yitzchak. And, as the first work about Rabbi Levi Yitzchak’s life, it immediately became very popular.

I heard from the Rebbe’s secretary, Rabbi Binyamin Klein, that whenever he entered the Rebbe’s room – and he did so often – he saw my book lying on the Rebbe’s desk, which made me feel very honored. And the Rebbe also honored me in another way:

It happened that once I felt unwell and had to be hospitalized for two weeks. I wrote to the Rebbe, asking for a blessing for a complete recovery and, as this was right around the 20th day of the Hebrew month of Av, the anniversary of Rabbi Levi Yitzchak’s passing, I reminded him that “I merited to give the Rebbe pleasure by writing the book about his father.” The Rebbe gave me the blessing I asked for and, before the word “pleasure,” he added, “the greatest.”